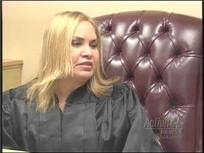 I caught this on Fark, over the weekend but the original account is at MySanAntonio.com. Essentially, a Justice of the Peace,  Mary Alice Palacios jailed 18 year old, Francisoco DeLuna--a serial-truant/dropout for unpaid fines of $11,140 that he began to rack-up at age 13. The jailing, involves132 days in the Texas pokey.  So a public defender (ACLU attorney, Gouri Bhat) comes across the story, gets involved and this is when it get's really interesting.  This is from Express-News reporter, Lynn Brezosky's story:

"A public defender who stumbled upon the case intervened and cut the sentence at 18 days. What the defender didn't know was that about 150 youths in the past year had similarly been sent to Hidalgo County Jail over school fines, many involving truancy.

One, Elizabeth Diaz, missed at least two weeks of school and the Texas Assessment of Knowledge and Skills (TAKS) test while in a cell with drug traffickers, human smugglers and prostitutes.

Almost all the cases had a common denominator: Justice of the Peace Mary Alice Palacios (pic, left).

On July 27, the American Civil Liberties Union named her, Hidalgo County Sheriff Lupe Treviño and eight other justices of the peace in a class action lawsuit alleging teens from one of the poorest counties in the nation were in effect sent to 'debtors prisons' over school fines.

Hidalgo County District Attorney Rene Guerra followed with a grand jury indictment of Palacios, charging her with three counts of official oppression, one each for De Luna, Diaz, and Lee Roy Treviño, another alleged victim.  Last week, the state Commission on Judicial Conduct suspended Palacios with pay pending the resolution of the case. After spending 15 minutes in jail, Palacios fired off a public statement accusing Guerra of being a tyrant who was out to get her.

District Attorney Guerra said that the grand jury's business was above the scope of personal vendettas and called Palacios' statement 'unbecoming of an elected official.'

While many schools and courts throughout the state are grappling with a growing truancy-related caseload, Palacios' hard-line approach has drawn criticism.  'Truancy's always going to be an inherent problem with schools,' Guerra said. 'I don't think the Valley has a monopoly. How we approach it and how we attack it is really a big issue. You're not going to solve truancy by sending kids to jail.'

Truancy is a family code offense, but Texas law offers schools a more punitive option, a Class C misdemeanor of  'failure to attend school' that carries a fine of up to $500 per offense and is handled in a justice court.

Warrants can be issued to arrest students with outstanding fines after they turn 17, when they become adult offenders.  'It's not constitutional to send somebody to jail if they are simply too poor to pay a fine,' said Gouri Bhat, the ACLU's lead attorney in the case. 'Under Texas law and Supreme Court precedence, you must be given other options.'

The ACLU lawsuit also shows that of the county's nine justices of the peace, only Palacios had an agreement that split fines with the school district and had the school district help pay for Palacios' space and staff.  The 40-page complaint also lays out details that might not have come out in the frenzy of Palacios' truancy court, which at times was held in a high school gym because of the caseload."
______________________________
Gotta love how the "Judge" howled when the tables turned and she found herself spening a few minutes behind bars.

How did we get to the point that we allowed "debtors' prison" to return to American jurisprudence?  How does debtors' prison contribute to the goal of paying debt?
Posted by Anonymous at 8:51 AM

Labels: don't get arrested in Texas