Have the Heart of a King! 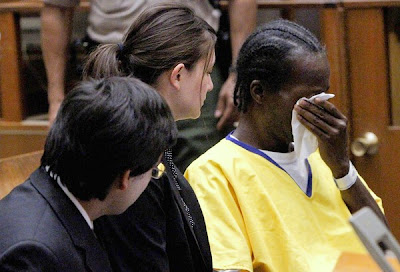 Victoria Kim at the LA Times features the storyof the homeless man, Gregory Taylor, who received 25 years to life under California's three-strikes law, after breaking into a church kitchen to get something to eat.  I can add nothing to this story apart from giving it an echo on my blawg:

"Gregory Taylor's case was so egregious that an appellate justice likened him to Jean Valjean of Victor Hugo's 'Les Miserables,' so disconcerting that he became the centerpiece of debate in a district attorney's race, so bewildering that a chapter was devoted to his story in a 2005 book about California's three-strikes law.  Taylor was a 35-year-old homeless man when he was arrested in 1997 for attempting to break into the kitchen of a Catholic church that served the poor, where he was a regular and occasionally volunteered. He told the arresting officer that he was hungry and wanted something to eat. A priest from the church testified in his defense, saying Taylor was welcome there.

Because of his two prior felony convictions — snatching a purse containing $10 and a bus pass, and an unarmed, unsuccessful attempt to rob a man on the street — Taylor was sentenced to 25 years to life in prison for his third strike.

Yet until a couple of Stanford law students took up his case earlier this year, Taylor languished in a San Luis Obispo prison with little hope of getting out: He was not eligible for parole until 2022.

On Monday, a Los Angeles County Superior Court judge ordered Taylor's release, ruling on a petition of habeas corpus filed by the students. The pair were part of a Stanford Law School project devoted to helping three-strikes inmates serving lengthy sentences for minor third offenses. So far, the project has won the release of 14 inmates, said Michael Romano, its director.

'Today we are able to correct the past and strike his third strike,' Judge Peter Espinoza said in his ruling vacating Taylor's original sentence and giving him a new sentence of eight years, which he has already served. He said the law, passed in 1994, produced what he called "unintended and unanticipated consequences" in its early years.

New evidence presented by the students of Taylor's character, medical history and exposure to domestic violence and trauma as a child meant that he falls 'outside the spirit of the three-strikes law,' the judge said.

Taylor, who entered the courtroom with his hands cuffed behind his back and clad in yellow-and-blue prison garb, teared up at the judge's ruling. Taylor's mother, who hadn't seen him since 1997, buried her face in her hands and wept.

'I just want to thank you for giving me another chance,'  Taylor said in a timid voice at the end of the hearing.

The students, Gabriel Martinez and Reiko Rogozen, said after the ruling that Taylor's case was a 'perfect example'  for thousands of others serving disproportionately harsh prison terms."
_____________________________
Shakespeare wrote:

The quality of mercy is not strained./It droppeth as the gentle rain from heaven/Upon the place beneath. It is twice blest:/It blesseth him that gives, and him that takes./'Tis mightiest in the mightiest. It becomes/The throned monarch better than his crown./His sceptre shows the force of temporal power,/The attribute to awe and majesty,/Wherein doth sit the dread and fear of kings;/But mercy is above this sceptred sway/It is enthroned in the hearts of kings;/It is an attribute of God himself.
Posted by Anonymous at 1:31 PM