"I Did Not Have Sex With That Woman!--uh, In the Courthouse" 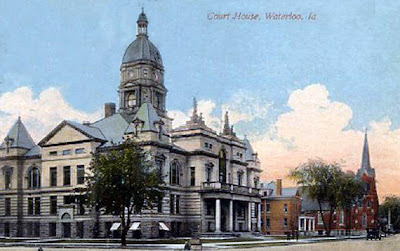 The Des Moines Register has continuing coverage of the great Clovis Bowles, a lawyer who makes other lawyers cringe in disgust.  Here's the Register's account of the twists and turns in the disciplinary case pending against Bowles for sex with an emotionally disturbed criminal client:

"A Waterloo lawyer says allegations that he had sex with a client in an Iowa courthouse are 'completely baseless.' The Iowa Supreme Court’s Attorney Disciplinary Board alleges that Clovis M. Bowles, 56, had sexual relations with a 33-year-old female client on several occasions in 2007 and 2008.

Bowles was allegedly aware the client had a history of emotional problems and had hired him shortly after attempting suicide and checking herself into a psychiatric facility. The Grievance Commission of the Iowa Supreme Court is recommending that the court suspend Bowles’ law license for three years.  Bowles said Thursday he did have sex with his client, but the commission members erred when they implied that his client was performing oral sex on him in the Black Hawk County Courthouse’s law library when someone walked in and interrupted them.

'Those findings are completely baseless,'he said.

Bowles said he grabbed his client’s buttocks while ushering her into the law library where the conversation quickly veered from a legal proceeding that he was handling on her behalf to something that was sexual in nature. But, Bowles said, almost immediately someone walked into the law library. His client stood up and the two of them immediately left the library, he said. 'We weren’t in there more than 20 seconds,' he added.

The next day, Bowles allegedly represented the woman during a criminal court hearing.  Bowles said that at his recent disciplinary hearing, commission members asked him whether he and his client engaged in oral sex in the courthouse library.

'I asked them to define oral sex for me and they refused,' he said. 'So I denied it.'

Bowles said he fell in love with the woman shortly after she hired him as her attorney in August 2007. The two had sex in his office and, later, at her home, he said.  A few weeks later, the woman filed a formal ethics complaint against Bowles, outlining the dual nature of their relationship. Bowles contacted her a short time later and allegedly asked her how they could 'make this whole thing go away.'

Within days, the two were married. They divorced after just six weeks, with Bowles agreeing to pay her $200 per month in alimony.  Bowles said the couple divorced only because social workers were telling the woman she needed to demonstrate independence if she wanted to regain custody of her children. However, he said he also believes that the woman initially agreed to have sex with him as part of a conspiracy to blackmail him.

Bowles said he and the woman two have remained friendly although he has no plans to rekindle the romantic side of their relationship.

'She’s the greatest little cook in the world,' he said. 'But how many times do you urinate on an electric fence before you say, ‘God, this is not a good thing for me to do?’ '

The Grievance Commission’s recommendation is based in part on a finding that Bowles not only had sex with a client, but repeatedly lied about it to investigators when questioned. Bowles acknowledges both of those offenses, but says he regrets his actions. 'I had an affair with a client,' he said. 'And I lied when I denied it. I shouldn’t have, but I did.'"
_______________________
There's just so much to be said about Clovis Bowles, but I'll leave it unsaid.  What I want to know is how it is that the Iowa Disciplinary authorities think a 3 year suspension will render this guy's character fit to represent Iowans in the future?

Do not screw the client, dammit.
Posted by Anonymous at 4:23 PM