Nothing Says: "Guilty," Dumb Ass, Like a Swatstika Neck Tattoo 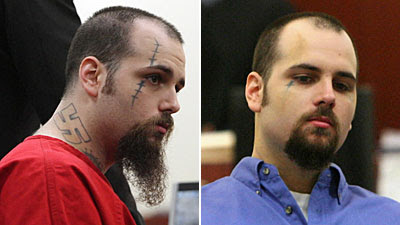 Reporter Amy Edwards at the Orlando Sentinel has an interesting look at the criminal suspect and tattoos:

"The two photos of John Allen Ditullio are a sharp contrast: There's the man donning red jail scrubs with a large swastika on his neck, barbed wire inked down his face, and a long, scraggly goatee. Then, there's the man in the blue dress shirt with a slight tattoo under his right eye and a neatly trimmed goatee.

Same man. One with inflammatory ink, one without.

That's because a Pasco County judge ordered the state to pay for a cosmetologist to cover up Ditullio's tattoos during his murder trial last year.That can be especially true of gang members, who often ink themselves with symbols identifying their gang affiliation, making it easier for law enforcement to make criminal connections.


It's just one example of how ink can play a role in the criminal justice system.

Detectives use tattoos to identify suspects. Prison officials use them to spot gang members. Defense attorneys often scramble to make sure they are hidden.  More than 45 million Americans sport at least one tattoo, according to one report, giving themselves — and everyone else — a permanent, unmistakable tag.

And for those in the criminal justice system, that ink can be vital.  Law-enforcement officers in Central Florida routinely document identifying marks like tattoos and scars on criminal suspects and other people they come in contact with. Some jails — such as Seminole and Lake — do too.

'They're an identifying factor that we can use in all facets of law enforcement,' said Seminole County Sheriff's Office spokeswoman Kim Cannaday.

If a suspect doesn't want to give their real name, tattoos can help deputies learn the truth. If there are several people with the same name, a tattoo can help distinguish who's who.

Orlando police used tattoos to differentiate identical twins Dante and Donte Hall, both of whom were convicted for their roles in a deadly robbery spree in Eustis several years ago. Donte Hall sometimes confused authorities by claiming to be his brother. But he got a neck tattoo, which gave his true identity away.

Detective Eduardo Lopez said officers once tracked down a fugitive wanted in New York for murder, but he gave the Orlando authorities a false name. The officers, suspecting they had the right guy, cross-checked his tattoos with those listed in a national law-enforcement database — and were able to identify him that way.  In Lake County, sheriff's detectives spotted a robber's 'DUVAL' neck tattoo in surveillance footage from a Walgreens last year. Investigators used that tattoo to identify the robber as Donny Pierce.

Tattoos are so noteworthy for the Lake County Sheriff's Office that its staff photographs all the ink on inmates booked into the jail, and then posts the photos on its website. 'Tattoos can be very important in identifying someone, as they are usually very unique to the individual who wears it,' said Sgt. Jim Vachon. 'Tattoos can even tell a story as to a person's affiliations and background.'

That can be especially true of gang members, who often ink themselves with symbols identifying their gang affiliation, making it easier for law enforcement to make criminal connections.  'I loved when the gang members brand themselves,' said Lopez, who used to work in the Orlando Police Department's gang unit.

If a suspect goes to trial, their tattoos could be an issue, just as it was in the Ditullio case.

Defense attorneys say they advise heavily inked clients to cover up with clothing — or in extreme cases, makeup — so the jury isn't influenced by the tattoos.

'You have to worry about what perception the jury will have,'  said veteran criminal defense attorney Trish Cashman. Cashman said she had one client with a tattoo of a state prison where he previously was housed — she advised him to wear long sleeves so the jury wouldn't see it. She also had a client who had 'jackass'tattooed across his forehead.  'Certainly the worst is the client who has the tear tattooed on his face,' she said.  There are variations of the teardrop tattoo and they have different meanings, but often indicate the wearer killed someone or had someone close to them die.

Detectives also use tattoos to identify victims in all kinds of cases.

When a woman's remains were found in woods near Eatonville last summer, Orange County sheriff's detectives released pictures of her tattoos to the public with hopes someone might recognize them.

Within days, detectives determined the woman was Lashanda Brand, and said she was identified because of her ink.
Sailor Bill Johnson, vice president of the National Tattoo Association and owner of Tattoo Time in Maitland, said he often hears stories about criminals being caught and victims being identified because of their ink. And at one time — 30 years ago — the public perception was if you had a tattoo, you were in a biker gang, a criminal, or in the military, he said.

But that was then.

'The mindset of that has changed dramatically,' Johnson said.  Celebrities and professional athletes have helped make tattoos more acceptable, and tattoos have gained in mass popularity over the past 10 years. Now, Johnson said, only a small percentage of people with tattoos are criminals or in a gang. Rocky Rakovic, editor of Inked magazine, said most people get tattooed as a form of self-expression, and also, for fashion. 'Tattooing was once for the guys and gals on the fringe, but now it's everywhere,' Rakovic said. 'It's come from motorcycle gangs to minivans."
__________________________
A mistrial was declared at the December trial of Ditullio, a retrial was originally set for March, 2010 but trial has not proceeded.  I will update this story if I can.

Many times over the last year I've related the story of my the adult woman who was my first child sex abuse client.  In the 1980s long before tattoos were common, she was a Tattoo centerfold, you can imagine the sensation she caused just coming in and out of our downtown offices.  Nowadays she would not get a second look.  In fact, at my 5:30 AA meeting, the fact of  my lack of tattoos makes me stand out.
Posted by Anonymous at 6:44 AM