Stealing From the Dead 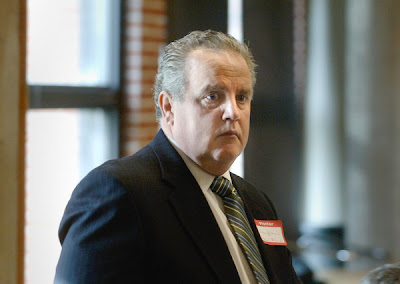 A funeral home director accused of stealing assets of dead people as he removed their bodies from their homes was found guilty Thursday of a host of larceny charges and faces two years in prison at his sentencing. Kevin Riley (pic), owner of Hartford Trade Services, was accused by state investigators of using a contract to pick up bodies for the state Medical Examiner's Office as a way to steal from the dead.

Riley would have himself appointed administrator of the estates of people with no relatives, giving him access to money and property with little or no scrutiny. Riley and his co-conspirator Yolanda Faulkner would then steal money, jewelry and paintings and sell some of them through an auction house where Faulkner also was the bookkeeper. Faulkner was also found guilty Thursday and also faces a two-year prison sentence.

Faulkner pleaded guilty under the Alford Doctrine to two counts of first-degree larceny, two counts of second-degree larceny, attempted larceny, forgery and filing a false tax return. While not admitting guilty, she conceded the state had enough evidence to convict her at trial. With the plea agreement, she faces significantly less time in prison than if she'd gone to trial.

He entered straight guilty pleas to charges that he double-billed the state and the families of dead people for whom he made arrangements at a facility in Meriden. The dead were cremated and the cost of a box in which their remains were placed was included in the cost of service. Riley admitted double-billing the state Department of Social Services and families of the dead for the boxes."
__________________________
A sharp-eyed magistrate caught discrepancies in one of the estates that the magistrate was supervising.  Inventories of personal property filed by Riley relating to decedents versus reports filed by others who were in the residence did not match.

The question I have (which will doubtlessly remain unanswered), is how many times did this crook pull this routine?  The question I have is how widespread is this abuse of decedent property by funeral operators?  I'm guessing, very widespread.
Posted by Anonymous at 12:08 PM