Lansing, Michigan attorney Mark C is one lucky drunk according to the disciplinary report lengthening his 60-day suspension to 120-days.  You can read the report of the Michigan disciplinary authorities for yourself, but in a nutshell, Mr. C. was told to AA meetings as condition of reinstatement following his recent suspension.  According to the disciplinary opinion Mark C. decided to keep drinking and forge the signatures of the AA chairs of meetings he falsely claimed to have attended.

Attorney Mark C. still has a license after his fraudulent representation of attendance at meetings, he did not attend.  In my opinion Mr. C. dodged a bullet that I don't believe you would have dodged in  most states, then again Mr. Fieger has gotten away with conduct in Michigan that would probably not have been tolerated in most states.  When I last looked in on Geoffrey Fieger, the verbal flame-thrower was threatening to run for Mayor of Detroit.  Michigan is one hell of a lenient place, if you ask me. 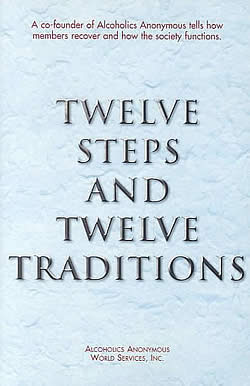 But, I digress, Mr. C.'s suspension raises the interesting question of whether A.A. attendance should be required as part of any disciplinary or legal process.  I talked about this awhile back and engaged in some debate with the commentariat over the question.  Some of my commentators believe that Alcoholic Anonymous being based on 12-[Suggested] Steps as a program of recovery that expressly embrace the notion of a "higher power" transgress the Constitution.  I disagree.

In the usual, circumstance, a drunk "on paper" is required to attend A.A. meetings and obtain the signature of the "Secretary" or other presiding member at a given meeting.  Sometimes a judge will tell an individual with a alcohol or drug problem to attend 3 or more meetings a week.  A.A. founded 75-years ago by Bill W. and Dr. Bob S. is based on 12-Steps and 12-Traditions.  The traditions are in fact a deliberate and express embrace of pure unadulterated anarchy.  A group and only a group governs its meeting.  If you are active in a group but grow disenchanted with the direction of the group, the traditions invite you to create a group to your own liking provided you can attract membership consistent with the AA principles.

OurTown is one of the original A.A. cities, and OurTown is frequently alluded to in the book Alcoholics Anonymous, aka the Big Book.  OurTown has thousands of A.A. meetings and several 24-hour clubs operate continuously.  There are regular A.A meetings in OurTown which by "group conscience" have chosen not to sign "court attendance" sheets.  The logic underlying this decision of those groups is that AA is not associated with "any related facility or oustside enterprise" and does not "endorse" outside enterprises; also,  A.A. is "non-professional;" and, A.A. does not want the A.A. "name" to be "drawn into public controversy."  Most groups, here, do "sign" court slips or attendance sheets.  I agree that this courtesy, should be extended especially since, I'm "on paper" via my voluntary participation in OurState Lawyers' Assistance Program[ming.]

But let's think about this critically, if you are a Lawyer in disciplinary trouble, should you be required as a condition of your restricted license to attend A.A. meeting, where they talk about God?

I say, why not? If you have a good counter argument, make it.
Posted by Anonymous at 6:17 AM