No Matter How Far Down the Scale We Have Gone . . .

Bobby Luke was drunk and speeding on his motorcycle and popping wheelies when he crashed into a car and killed Lynda Colegate, 55. Mr. Luke was in the wrong lane, passing other cars in the no passing zone when he smashed into Colegate's car. The motorcycle engine from Luke's Honda "crtoch rocket" hit Colegate in the head killing her. 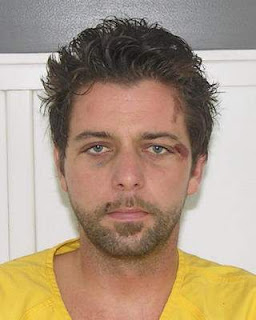 According to a report at the Cincinnati Enquirer, Mr. Luke pleaded guilty on Tuesday to a charge or aggravated vehicular homicide.   Luke will get at least two years in prison and possibly as much as 13 years.  He is slated to be sentenced September 8th  by Hamilton County Common Pleas Judge Jerome Metz.
The news report indicate that at the time police tested Mr. Luke for alcohol, his BAC was .079 percent  which is .001 percent below Ohio's legal limit for driving apparently he had vomited. Later blood tests demonstrated BAC of .104 percent, which is well above the legal limit.
Other interesting facts are that at the time of the crash, Mr. Luke lived in Indiana but had Kentucky plates and of course, the accident happened in Ohio. Luke's Indiana license was suspended.  How much chaos can anyone maintain in their lives?  Luke is an example of full-on chaos directly attributable to his use and abuse of alcohol.  His actions are those of an alcoholic tornado in a suicide dance along the roads and avenues of the tri-state area around Cincy.

There is an AA "promise" that has come true in my life--no matter how far down the scale we have gone, we will see how our experience can benefit others.  As awful as this story is, this promise and many others can come true for Bobby Luke.
Posted by Anonymous at 2:43 PM