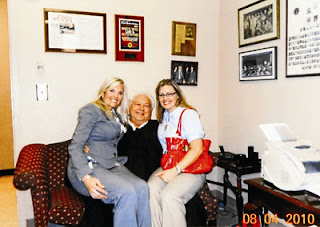 Cobb County Ga. Chief Judge Kenneth  Nix was reported by the Atlanta Journal-Constitution to have abruptly announced his resignation the other day.  The way it was reported you suspected that there was more to the story, this AM correspondent Debra Cassens Weiss at the ABAJournal collects and reports all the accounts.  It turns out that Judge Nix, was being, um....inappropriate.  Here's the ABAJournal summary:

"Judge Kenneth Nix announced Tuesday that he will retire on Oct. 4, the day of his 71st birthday, according to stories by the Fulton County Daily Report, the Atlanta Journal-Constitution, and the Marietta Daily Journal. Nix told the Marietta Daily Journal in an earlier story that, after the photo shoot with the two women, he 'flicked them both on the fanny.' The newspaper published the lap photo.

'That was a stupid, stupid mistake,' Nix told the Marietta Daily Journal. 'I don't think that's sexual harassment. I think it's stupid of me to do it. It may be improper touching, but it's not to be such that you know I should be whatever.'

The women, Assistant District Attorney Susan Treadaway and deputy investigator Glenda Roberts, said in a statement that what happened during the photo shoot was 'more serious than reported,' the Marietta Daily Journal says. The women said they had visited Nix’s office to say good-bye to him after a courtroom reassignment.

'The judge asked us to sit on his knee just like he does to other female attorneys every Christmas when he is wearing his Santa Claus suit. He is a 70-year-old man and even though we both were reluctant to grant his request, it is sometimes difficult to say no to a grandfatherly figure and it would have been awkward. What happened later was a crime when he inappropriately touched us. What occurred was more serious than was reported.'

Nix told the Fulton County Daily Report that he is resigning to avoid an investigation into his conduct. According to the story, 'He said he also feared an exploration into possibly other issues that could embarrass him and his family.'  District Attorney Patrick Head and the two women say they did not file an ethics complaint against the judge or take any legal action. Head said Nix’s retirement is 'disturbing' and he is 'a well-respected jurist and has served with distinction for many years.'

The vice-chair of the Judicial Qualifications Commission, Judge John Allen of Muscogee County Superior Court, echoed that assessment. 'I've known Ken for many years,' he told the Fulton County Daily Report. 'He is one of the finest judges and persons I've ever had the privilege of knowing. His retirement will be a loss to the public.'"
_______________________
This is bullshit.  The apologists for Nix, and Nix's minimization of his sexual harassment of the public servants under his authority enrages me.  Women attorneys, women in the workplace do not deserve to be treated this way.  This guy was pulling this bullshit for years.  Good riddance.
Posted by Anonymous at 9:11 AM