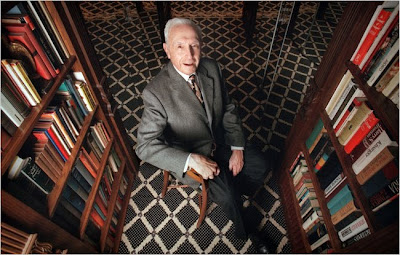 The obit by Douglas Martin pulled back the curtain on something historians have looked at in great detail in recent years, the underlying legal basis for the genocide of the Jewish people by Hitler and the Nazis.  Dannenberg was a counterintellegence officer at the end of World War II.  It was Dannenberg who located and turned over the original document comprising the Nuremberg Laws signed by Adolph Hitler.  The Nuremberg laws served as the doctrinal underpinnings by the allegedly rational and culturally advanced Germans, resulting in the dehumanization and attempted complete extermination of the Jews.

Historians argue that the 20th Century Germans were a law-based bureacratically-administered nation.  For the genocide of the Jews and others to have occured there had to have been a legal foundation. The Nuremberg laws which was widely-disseminated in copy throughout the Europe, was the foundation for the systematic murders that followed.

This is Mr. Dannenberg's obit:

"It was April 28, 1945, and the war in Europe was in its final hours. Days earlier, Martin Dannenberg, an Army intelligence officer, had seen piles of dead bodies at Dachau, the concentration camp in Germany. He said they were stacked like cordwood.

Now he was in a bank vault, opening an envelope sealed with red swastika embossments. He pulled out a document — four typed, black-bordered pages — signed by Adolf Hitler and three top lieutenants. It proclaimed the Nuremberg Laws.

These laws stripped Jews of their German citizenship; forbade marriage and sex between citizens of 'German blood' and Jews; and established the swastika as the German flag while forbidding Jews to display it. Announced at a rally in Nuremberg in September 1935 and quickly rubber-stamped by the German Parliament, they provided the legal pretext for the dehumanizing of Jews that led ineluctably to the piles of bodies Mr. Dannenberg saw.

'I had the most peculiar feeling when I had this in my hand, that I should be the one who should uncover this,' Mr. Dannenberg said in an interview with The Baltimore Sun in 1999. 'Because here is this thing that begins the persecution of the Jews. And a Jewish person has found it.'

A retired insurance company chairman, Mr. Dannenberg died on Aug. 18 at age 94 at his home in Baltimore. His wife, Margery, said he had been having health problems since a fall four years ago.

A week after his death, on Aug. 25, the Huntington Library in San Marino, Calif., donated the Nuremberg document to the National Archives. The confluence of events was coincidence, but the gift marked the end of a long, strange journey for one of history’s most evil proclamations.

Gen. George S. Patton, who led the Third Army in Europe, originally decided to keep the document rather than send it to be used as evidence in war crimes trials, as Gen. Dwight D. Eisenhower, the commander of Allied forces in Europe, had ordered. General Patton gave it to the Huntington, whose founder had been a close friend of his family.

The Huntington put it in a bombproof vault, did not display it and for 54 years kept its very existence a secret. Part of the reason for the secrecy seems to have been concerns that displaying it might blur the library’s focus on British and American history and art.

But after the Skirball Cultural Center, a museum dedicated to the Jewish experience, opened in 1996 in Los Angeles, the Huntington, under new leadership, lent the document to it.  More than three million people saw the document before it was removed from view in 2009 to protect it from light. The Huntington then decided that it belonged in the National Archives in Washington, which contain other important Nazi documents.

Martin Ernest Dannenberg was born in Baltimore on Nov. 5, 1915, and began working as a mailroom clerk at the Sun Life Insurance Company after graduating from high school. He attended Johns Hopkins University and the University of Baltimore School of Law at night.

He dropped out of law school when his boss pointed out the window at men selling fruit. 'Each one of them used to be a lawyer before the Depression,' he said.

'I know the whereabouts of a document I think you Americans would like to have,' the man said. 'I will tell you where it is if you will see that I get to my home, which is near a town called Eichstatt.'

After a convoluted trail, Mr. Dannenberg and two other agents ended up in the vault of a bank in Eichstatt. His tale has been corroborated by written records left by the deceased interpreter who accompanied him, Frank Perls. Mr. Dannenberg took photographs with his Minox spy camera.   He confessed that he had briefly thought about keeping the document for a souvenir, but knew it was needed for what became the Nuremberg war crimes trials, where facsimiles had to be used. After learning in 1999 that General Patton had taken the document for himself, Mr. Dannenberg, in an interview with The Washington Post, called him 'that scoundrel.'

For more than 50 years, Mr. Dannenberg worked for the Sun Life Insurance Company, rising to chairman before retiring in 1987. He was also president of Har Sinai, one of the oldest Reform Jewish congregations in the United States, outside Baltimore. [ . . . }

People who saw the Nuremberg Laws with Hitler’s descending signature at the Skirball reported being transfixed as they imagined the horrors the crisply typed words engendered. Though thousands of copies were distributed throughout the Third Reich, the original seemed frighteningly different.

Mr. Dannenberg also felt another emotion, his wife said, after the museum removed Patton’s picture from the exhibit and substituted one of him. He was pleased."
Posted by Anonymous at 11:27 AM