Florida Chief Justice: "You Are a Bad Judge" 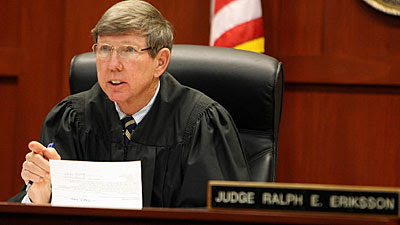 The Orlando Sentinel has the report and a video of Seminole County Judge Ralph Ericksson being reprimanded by the Chief Justice of the Florida Supreme Court.  This is reporter Rene Stutzman's story:

"Showing no emotion and saying not a word, Seminole County Judge Ralph Eriksson this morning stood before the Florida Supreme Court in Tallahassee and was publicly reprimanded for being a bad judge.

The reprimand was delivered by Chief Justice Charles Canady. For four minutes, Canady calmly and without emotion read to Eriksson his list of failings. It was a long list. Eriksson had decided to punish an attorney one day in 2007. The lawyer had asked for a new judge, and Eriksson responded by throwing the lawyer's client in jail.  That, said Canady, was an abuse of power. The lawyer was only trying to exercise a legitimate legal right. And Canady rebuked Eriksson for being mean and dismissive to several people who appeared before him one day in 2007 in back-to-back domestic violence injunction hearings.

Eriksson had earlier complained about having to handle those hearings. He had never done it before and had said it wasn't part of his job.  Still they appeared, individuals who had filed paperwork, saying they were afraid for their safety. They had no attorneys, and Eriksson mocked and berated them and hustled them out of his courtroom, denying their requests for protection.

Canady described that behavior as 'intolerable' and said Eriksson had punished innocent people, turning away those who needed help, because he was dissatisfied with a work assignment.

Those actions, Canady said, had violated five of Florida's canons of judicial ethics, including failing to make sure every person had the right to be heard and failing to handle cases fairly.

Eriksson, 63, of Longwood, has insisted that he never intentionally did anything wrong.

He has been a judge for 15 years and is set to retire at the end of the year, when his term expires, but his legal problems are not over.  The state agency that polices judges, the Judicial Qualifications Commission, has filed another set of charges against him. This time, he's accused of repeatedly defying an appeals court by ordering former defendants to jail for refusing to pay court costs.  In JQC pleadings, Eriksson has said he did nothing wrong."
______________________________
I originally reported on Judge Ericksson back in January comparing him unfavorably with one of the best Small Law judges I ever knew.  It can not be overstated how important the municipal courts are, these are the venues where most citizens have their interaction and form their impressions about the Rule of Law.  I've been blessed to know some great small law judges.  They are truly giants.
Posted by Anonymous at 11:55 AM