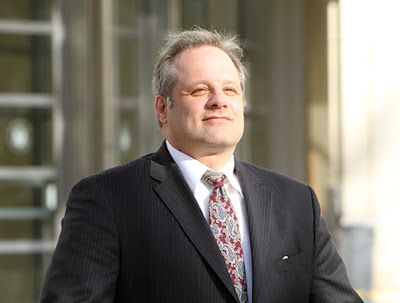 Turner is now a felon.  This is the New York Daily News report on his conviction, Friday:

Turner's mom and teenage son gasped and sobbed as the jury found the Internet shock jock guilty of a single charge of threatening to murder the judges - a charge that carries up to 10 years in prison.  An ashen-faced Turner stripped off his tie and belt and handed his wallet to a clerk before he was led out of the courtroom in downtown Brooklyn.

'I love you, dad,' his son, Michael Turner, 16, said after the verdict was read.

Relatives of Turner angrily denounced the lightning-quick verdict, which came on the fourth day of his second retrial. Two previous trials ended in mistrials after jurors were unable to agree on a verdict.

'There goes the First Amendment for everyone,[ said Kathy Diamond, Turner's mother. 'These judges, their job is to protect the Constitution, not shred it. ' She hugged her grandson who also insisted his father did nothing wrong. 'It's totally wrong,' Michael Turner. 'It's (his) opinion not a threat.'

Jurors rushed out of the Brooklyn Heights courtroom without speaking to reporters. No date was set for sentencing.

Prosecutors say the former radio host threatened federal judges Richard Posner, William Bauer and Frank Easterbrook after they upheld Chicago's ban on handguns. 'Let me be the first to say this plainly: these judges deserve to be killed,' Turner posted on his website in June 2009.

Turner, 48, of North Bergen, N.J., also posted the judges' phone numbers and office addresses, federal prosecutor Diane MacArthur told the jury.  The first two trials for Turner ended in deadlocked juries. The case was heard in Brooklyn so Turner would not be on trial in the judges' own courthouse."
Posted by Anonymous at 9:31 PM