Free Speech Can Come Down to Inches 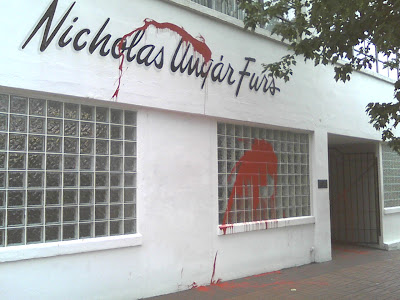 The great Portland Court Reporter, Aimee Green at the Oregonian has this report of Free Speech adjudged by intent not mere inches:

"A judge has acquitted two anti-fur protesters of accusations they violated a restraining order by standing 4 inches too close to the owner of Nicholas Ungar Furs in downtown Portland.  Portland police and prosecutors had alleged that protesters Justin Kay and Jeffrey Wirth were approximately 49 feet, 8 inches away from fur merchant Horst Grimm when a restraining order stated the two protesters must stay at least 50 feet away.
Share In a trial that ended Wednesday, Multnomah County Circuit Judge Maureen McKnight listened to several hours of testimony and argument about the accuracy of protesters who used a measuring tape versus the accuracy of a police officer who used a laser-measuring device.

Kay, 21, and Wirth, 25, said they and other protesters used a measuring tape to mark off 50 feet of distance from the store's front door, which Grimm would use to leave the building. To be sure they didn't violate the restraining order, they always stood back at least a few feet to provide a buffer, they said.

But Kai Grimm, Horst's son, who also works at the store, believed the men were too close. He snapped a photo of protesters next to a light pole at Southwest 12th Avenue and Yamhill Street, and told police he'd spotted Kay and Wirth there on Nov. 18. The next day, police Officer David Sessum measured the light pole at about 4 inches shy of 50 feet from the front door of Ungar Furs.

Sessum testified that as he stood next to the pole, Wirth stood nearby – and again violated the restraining order for being within 50 feet of Grimm, who at that moment had just exited the store.  Deputy District Attorney Lauren Kemp argued that although the distance in dispute isn't much, Kay and Wirth 'chose to put themselves in a precarious situation' by standing so close to the 50-foot limit. The onus, she said, was on them to stay clear of Grimm.

In announcing her ruling, [Judge] McKnight explained that she thought the police officer did a more accurate job of measuring the distance.  'But that's not the issue,' McKnight said.   What did matter, the judge said, was whether Kay and Wirth thought they'd stepped within 50 feet of Horst Grimm. And it was clear, the judge said, that they did not think they had.  'I believe they attempted to honor the order,' McKnight said. To violate a restraining order, the defendants must 'willfully' disobey it, McKnight said.

She said authorities should mark precisely where they thought 50 feet from the door is to avoid future disputes.

But that's a moot point for Kay and Wirth, at least for now. The restraining order against them expired last month, and Horst Grimm hasn't applied for a new one. That may be because the organized protests stopped in February or March, about the time that Kay and Wirth learned prosecutors were going forward with their case.

The ruling drew big smiles from Kay and Wirth; their attorneys, Kenneth Kreuscher and Paul Loney, who took on the case pro bono; and more than a dozen people who sat through the trial as supporters.  The dispute arose after sign-holding, chanting and sometimes loud and confrontational protesters began showing up at Ungar Furs in late 2008. Kay and Wirth testified they protested about three to five days a week, for about four hours a day.

'We certainly said things like he's a murderer, and I stand by that as a point of fact,'  Kay said in an interview after the ruling.  But Kay said he, Wirth and others never touched Grimm or his son, or threatened to hurt them. Kay contends that Grimm pushed protesters and struggled with one protester to take her camera.

A man who answered the phone at Ungar Furs on Wednesday and didn't identify himself said the Grimms decline comment.  Horst Grimm got restraining orders against Kay, Wirth and two other protesters last summer in Clackamas County, his home county, under Oregon's Elderly Persons and Persons with Disabilities Abuse Prevention Act. Because Grimm was 75, he didn't have to prove he was at risk of being physically harmed. Rather, he could get a restraining order by proving that he was called inappropriate or profane names or that he was ridiculed, intimidated or harassed.

With Wednesday's acquittals, Kay says protesters are thinking about restarting their campaign in front of the store.  Kreuscher, Kay's attorney, said the protests are constitutionally protected speech, and any restraining orders preventing protests too close to the store or Horst Grimm are unconstitutional.

'That's the beauty of the First Amendment, of freedom of speech,'  Kreuscher said. 'They protect the rights of people to say things that may be offensive to some people...People have the right to say things, even if they upset other people.'"
________________________
The thing I like about Aimee Green's articles at the Oregonian, is that her stories are fresh and reach for details that most other court and cop reporters ignore that supply a real essence to what the underlying disputes are about.  Green also includes fact and descriptions that make mundane cases truly extraordinary.  I'm a big fan.

My dear friend, Pat, is a life long, rabid Right to Life protester.  Over the weekend we were cycling through the OurCounty Metropark and I was telling him about seeing him decades before swarming with a bunch of college kids through a Public Square crowd passing out Right to Life literature.  Pat's unusual law career in part is attributable to First Amendment efforts on behalf of Right to Life organizations.  The contours of the rulings in Pat's many cases echo in this story, and thus always attract my attention.  You may not appreciate a viewpoint or put another way, a point of view can be offensive to you and yet positively effect your rights and privileges.

The notion that we have gotten to a place in our public discourse that allegedly serious men and women would amend the US Constitution in their xenophobia or for political gain should be deeply offensive to all of us.
Posted by Anonymous at 5:27 AM