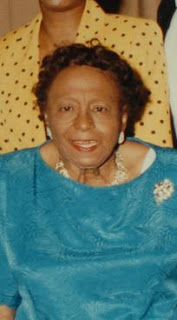 The Atlanta Journal-Constitution is reporting the settlement of the civil claims arising out of the killing of 92 year old Kathryn Johnson by bad cops.  This disturbing tale once again drives home the cost of "tough justice."

"Four years after rogue narcotics officers killed a 92-year-old woman while illegally raiding her home, the city has finally settled with her family.  Kathryn Johnston, 92, was shot and killed Nov. 21, 2006, when police officers illegally raided her northwest Atlanta home.  Police officers burst into Kathryn Johnston's house kill[ing her] in a hail of bullets after [she] fir[ed] a [warning]shot [apparently in fear of a break in.]

Atlanta Mayor Kasim Reed announced Monday morning that the estate of Kathryn Johnston, led by her niece Sarah Dozier, would be getting a $4.9 million settlement. The full city council will debate and vote on it this afternoon.  Under the structure of the settlement the estate will get $2.9 million this year and another $2 million in fiscal year 2012.

Reed said the resolution of the case is an important healing step for the city and the police department, which was nearly ripped apart because of the shooting. 'As a result of the incident, several police officers were indicted in federal and state court on charges and were later convicted and sentenced for their actions,'  said Reed, adding that the Narcotics Unit has been totally reorganized.

Johnston was killed when a police drug unit tried to execute a 'no-knock' warrant on her home, using [false] information provided by an informant who claimed he had purchased drugs at from the home. After officers kicked in the door, the elderly Johnston reached for a gun and fired one shot. Police returned fire, killing her. No drugs were found, and officers planted drugs in the home that had been recovered from a different raid.

This past June, two Atlanta police officers involved in the shooting were fired after an internal investigation found they lied and falsified documents; another officer resigned and six more were disciplined."
___________________
So get this, they go in to this home, and kill this old lady, and with drugs stolen by them from an evidence locker, these officers cover up their crime.  Rule of law?  Respect for law and order?  Not a chance.
Posted by Anonymous at 3:30 PM