LaNia Copeland, a journalist with the Bay City Times reports on the Midland County Judge who refuses to recuse himself after telling a local defense attorney, to "screw you."  The underlying case involves a vehicular homicide charge and prior history between the lawyer, judge, and defendant.  Here's the story:
"A Midland County judge reportedly told a defense attorney 'screw you' during a closed-door meeting to discuss a case. Now, the attorney wants the judge disqualified from the case that involves the death of a 49-year-old Midland woman. 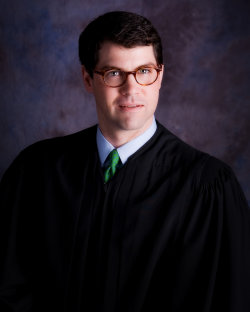 Share Gladwin County Circuit Judge Thomas R. Evans on Thursday will hear arguments on a motion to disqualify Midland County Circuit Judge Jonathan E. Lauderbach (pic) from the trial for Lewis C. Henderson Jr.. Bay City attorney Jason P. Gower filed the motion on Henderson’s behalf. Henderson’s relatives hired Gower in June to replace a court-appointed attorney.  Henderson, 54, of Midland, is charged with operating a motor vehicle under the influence causing the death of his ex-wife, Kelly S. Deering.
Gower filed the motion seeking Lauderbach’s disqualification Thursday, a day after the judge allegedly told Gower 'screw you' and Gower claims the judge made comments suggesting he had already decided Henderson is guilty. Specifically, Gower said Lauderbach told him the crash would not have happened had Lauderbach sent Henderson to prison for felonious assault in 2008. Henderson received three years of probation after pleading guilty, state records show. Gower alleges Lauderbach’s comments express the judge’s biases against him and his client.

'... (Lauderbach) would not be able to make decisions on pending motions or evidentiary challenges ... which would pursue truth and justice appropriately through a fair trial and impartial handling of a criminal matter,” Gower said, calling the alleged outburst 'outrageous.'

Lauderbach on Friday heard Gower’s motion for disqualification but declined to step down.  Transcripts from the hearing show Lauderbach denies having an outburst but admits saying 'screw you' to Gower during the Wednesday hearing in his chambers.

Lauderbach alleges Gower was argumentative and disrespectful and, at least once during the hearing, rolled his eyes, court records show."
________________________________
I had an elderly "visiting" Judge go wild on me in chambers in the middle of a "security" rape case after I told him that he had mistried the case.  He shouted at the plaintiff's husband who the Judge could not "hear" answer preliminary questions.  This Judge compounded the problem by telling the jury in open court that I "accused [him] in chambers of lying," but if he, the Judge, had done anything wrong "disregard [his] mistake."  A reviewing court later agreed that the Judge had committed a terrible error but that the Judge's "corrective instruction" rendered the error, "harmless."  The Court of Appeal refused to reverse a split defense verdict.

Judge Lauderbach sounds like a good judge who has been provoked.  I'm not sure what "prejudice" towards the defendant is indicated by the Judge's remark to attorney, Gower. But you can see what sort of line Judges must walk to do their jobs in a way that will withstand scrutiny if only in the opinion of lawyers and electors.
Posted by Anonymous at 9:35 AM