Good For You, Chicago! 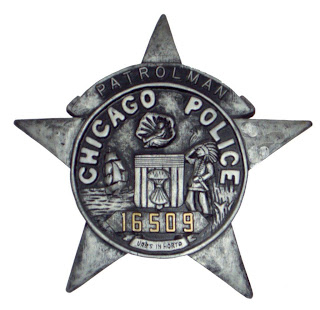 A US Federal Circuit Court of Appeals upheld the conviction of a Chicago Cop who handcuffed a stabbing victim to a wheelchair, and unprovoked beat him.  The beating was caught on video.  Tuesday the 7th Circuit Cout of Appeals upheld former officer William Cozzi's 40-month prison sentence for violating the rights of Randle Miles.  This is reporter Frank Main's Chicago Sun Times story:

A Chicago Police officer’s controversial 40-month federal prison sentence for beating a man handcuffed to a wheelchair has been upheld.

Police Supt. Jody Weis did nothing wrong when he alerted the FBI that Officer William Cozzi lied about the incident, the U.S. 7th Circuit Court of Appeals says.  Cozzi’s attorneys had argued Weis violated the officer’s rights by sending two e-mails to an FBI agent asking if the bureau had investigated Cozzi for civil-rights violations.  The e-mails disclosed that the previous superintendent had unsuccessfully tried to fire Cozzi and that Cozzi 'falsified his statement' during an internal police investigation. Weis, a former FBI official, also sent the FBI a videotape of the beating.

The 7th Circuit said prosecutors weren’t given any reports that contained Cozzi’s protected statements to police investigators. And Weis didn’t tell the FBI what Cozzi’s statements contained, the appeals court said. 'We do not think that simply saying a statement was ‘falsified,’ by itself, is enough to impute improper use of the statement to prosecutorial authorities,' the appeals court said in its ruling late last month.

The appeals court also rejected Cozzi’s argument that he shouldn’t have been sentenced under federal guidelines for aggravated assault.  'In his federal plea agreement, Cozzi acknowledged that he hit [the victim] in the face with a dangerous weapon,' the court said.

Rank-and-file officers were furious with Weis over his decision to notify the FBI about the beating. Many officers felt Cozzi was being punished twice for the same crime. He had previously pleaded guilty to a misdemeanor in state court and was sentenced to probation.

In January 2008, a month before he became superintendent, Weis saw a videotape of the beating, which was obtained by the Chicago Sun-Times in a Freedom of Information request. He told reporters he was unhappy with the Chicago Police Board’s decision to suspend Cozzi for two years instead of firing him, and promised to review the case. The same month, Weis sent the e-mails to the FBI. 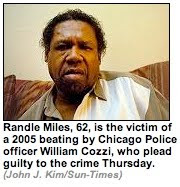 In federal court, Cozzi pleaded guilty to violating Randle Miles’ civil rights. Miles, a stabbing victim, was drunk and abusive to the staff at Norwegian American Hospital after he was taken there for treatment in August 2005.
Cozzi had handcuffed and shackled Miles to his wheelchair before striking him, court records show. A hospital surveillance video captured the beating — and showed Cozzi was lying when he said Miles provoked the incident by throwing punches. Before he was sentenced in June 2009, Cozzi told a federal judge that he 'let my frustration get the best of me.'

But also note, how the bad guy in this story is the Superintendent of police who reported the crime!  Amazing.
Posted by Anonymous at 7:19 AM