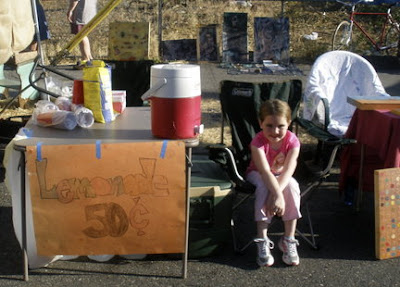 Reporter Helen Jung at the Oregonian brings us up to date on our favorite Lemonade purveyor:

When Julie Murphy first decided to sell lemonade, she just wanted a little money to buy some treats. The 7-year-old's plans are a lot grander now.   After county health inspectors shut down her lemonade stand last month because she didn't have a food-safety license, radio station 105.1 and Les Schwab Tire Centers set her up in business for an afternoon.

Now, she has $1,838.31 -- enough to bankroll a trip to Disneyland for her mother and her at the end of this month.   'We just really appreciate everything that everyone did,' said Julie's mother, Maria Fife. 'She got her lemonade stand, she had a good experience and that's all she wanted in the first place. And she met some really cool people.'  Plus, the girl gets to go on a vacation that her mother, who recently got a new job, had promised earlier would happen only 'someday.'

It's a sweet ending for the two, who were threatened with a $500 fine if they didn't pack up Julie's stand at Last Thursday, the arts fair in Northeast Portland. Multnomah County Chairman Jeff Cogen subsequently apologized and directed health inspectors to use 'professional discretion' in enforcing food-safety laws intended for adults in commercial businesses.

The lemonade stand-off went national as anti-government factions seized on it as a symbol of a bureaucracy gone crazy. The county received more than 200 e-mails, mostly critical of its handling of the situation.

Some people took aim at Fife for taking her daughter to a street fair to sell lemonade instead of setting up in front of her Oregon City home. And others criticized a general lack of common sense, saying inspectors should have treated the lemonade stand as the child-run venture that it was. Lemonade buyers know that kid stands aren't up to professional standards, they argued.

Fife and her daughter have appeared on Fox News and local TV stations and Fife has been interviewed by The New York Times, The Associated Press and several other news outlets. The attention also has generated small donations and offers to sponsor a lemonade stand from people as far away as Tennessee.  But the hoopla has also been overwhelming. Julie put her hands over her ears and ran out of the room when she saw herself on TV, Fife said. 'She's just ready to move on with her kid stuff,' she said.   Fife also was surprised by criticism of the two for setting up at a Portland fair when they live in Oregon City.

'I didn't think it was an us-versus-them kind of thing,' Fife said. She thought Last Thursday, with its diversity and neighborhood feel, would be a good scene for her daughter who has grown up in the suburbs.  'I wanted to let her know the whole world isn't just like us,' she said.  But though Fife and her daughter are ready to move on, the controversy isn't quite over.

Michael Franklin, a musician and vendor who rallied around Fife and her daughter when the health inspectors shut them down, is organizing a 'lemonade revolt' for Last Thursday later this month.  Franklin, who first publicized the confrontation on his radio show for an anarchist website, said he has seen Last Thursday change from the decentralized street gathering of artists and musicians to a more professional commerce-driven event in the years he has played music and helped his wife sell handmade bags.

He said he expects hundreds to set up rogue lemonade stands or other activities to 'reclaim' the monthly festival.  'We're going to take it back so it's less about people being able to shop and walk by and glibly spend money, and more about people having an experience with one another,' he said. 'You don't have to purchase permits -- that's the point.'

As for Julie and her mom, the two won't be at the next Last Thursday. Fife is concerned about safety and added that the two never meant for the lemonade stand to become a political cause.

But Julie might not be done with the lemonade business just yet.

A minor-league baseball team in Chico, Calif., that heard about Julie contacted her mother to see if she would be willing to sell lemonade at one of its games. Half the proceeds would go to the baseball team's charity -- an autism awareness foundation. And Julie's half?  'She's always been a Shriners baby,' said her mom, noting that Julie was born with a dislocated hip and has juvenile rheumatoid arthritis. 'Her half would go to Shriners.'
________________________
Brava, Julie!
Posted by Anonymous at 1:52 PM