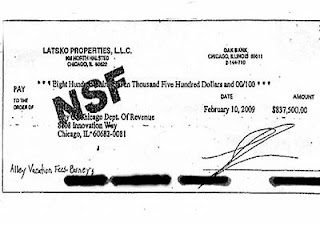 Reporter Tim Novak at the Chicago Sun Times has this remarkable look at the "charmed life of Fred S. Latsko."  You're excused if you're thinking "Gatsby:"

"Fred Latsko and a partner built [an] upscale luxury department store, Barney's New York, over an alley off Oak Street.  It took Fred Latsko 2 1/2 months to make good on this $837,500 bounced check he wrote to City Hall in 2009.

After some troubles as a 19-year-old left him with a criminal record, for instance, he turned to Rod Blagojevich. He'd never made any campaign contributions to Blagojevich, but, on the governor's last day in office, Jan. 29, 2009, he erased Latsko's criminal record -- without any explanation. Way back, Latsko, now 44, was a driver for Sid Luckman, the legendary Bears quarterback. Today, Latsko's a Gold Coast developer of high-end real estate who's well-known on the social circuit.

A few years ago, Latsko bought a farm for nearly $7 million -- from Oprah Winfrey. His wife, whom he's divorcing, is partners with Oprah's former chef, Art Smith, in the wildly popular Gold Coast restaurant Table 52. Latsko owns the restaurant's building.  Latsko -- who grew up in Hinsdale, the son of a General Motors Fisher Body plant supervisor -- is a regular at Chicago's top parties, mingling with movers and shakers including Mayor Daley and his family.  And Latsko has been generous with politicians, including Daley. He contributed $28,000 to the mayor's last re-election campaign. 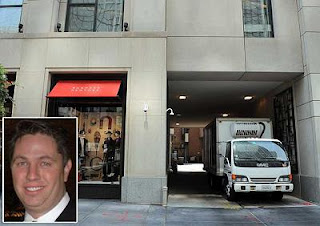 Altogether, the two checks to City Hall that he didn't have enough money in the bank to cover amounted to $884,509.50. They were for development fees for Barneys New York, a luxury department store that he and a partner built over an alley off Oak Street, and for a yet-to-be-built high-rise apartment building in River North, across from Gene & Georgetti, the popular restaurant.  Latsko previously had run afoul of City Hall. He has been caught working without building permits and ordered to stop. And the city has sued him to fix building code violations and to collect $1,020 in unpaid parking tickets.

But the Daley administration never sued Latsko over the nearly $900,000 in bad checks.  In fact, even as City Hall waited two years for Latsko to pay off the last of his bounced checks:

• The city's Zoning Board of Appeals, whose members are appointed by Daley, gave Latsko permission to build a house on the Gold Coast -- on a 19-foot-wide lot.

• And the mayor's son, Patrick R. Daley, moved in to a Gold Coast apartment building managed by Latsko.

It took nearly two years for him to make good on the other one, records show. He paid that off July 28, after a Chicago Sun-Times reporter asked about Patrick Daley's apartment. Latsko walked in to City Hall and used two Visa cards to pay the $47,009.50 that he originally wrote the city a check for in August 2008 to cover permit fees over the high-rise he wanted to build on the site of what remains a parking lot at 225 W. Illinois, across Franklin from Gene & Georgetti.

He also had to pay an extra $34 -- the city's standard fee for anyone who bounces a check.   And even though the city never sued Latsko over the check, City Hall made him pay $500 in legal fees. 'He didn't get any special treatment,' says Jennifer Hoyle, spokeswoman for the city's Law Department. 'They were disputing who owed the money -- [Latsko's company] or Latsko. We were prepared to file a lawsuit. Legal action was always contemplated.'

Says Jacquelyn Heard, Daley's press secretary: 'As far as I'm aware, this guy doesn't really have a connection to the mayor other than campaign donations and that he's a developer who's crossed paths with Mayor Daley, which would put him in a category with many people in this town.'

Latsko agreed to talk with a Sun-Times reporter, but he never did."
____________________________
It strains credulity to say Latsko had no "direct" line to Mayor Daley.  This sort of thing is one of those scenarios where a big roller was caught short when the bottom fell out of real estate.  He's squeaking through the cracks, but soon enough he'll run head long into a door jamb.  Just watch.
Posted by Anonymous at 9:22 AM