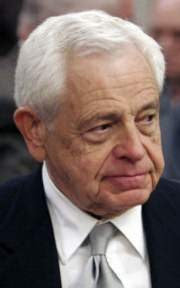 When I saw the story, I knew immediately that the buried story would turn out to be the "big story" and sure enough, late in the week the ABAJournal.com and professional class action objector, Ted Frank at his blawg, PointofLaw.com had picked up the report.  This morning, Jim Hannah at the Cincinnati Enquirer had a feature on the charges.  This is Hannah's update:

"The Kentucky Bar Association is investigating Cincinnati class-action lawyer Stan Chesley in connection with two of Northern Kentucky's biggest legal cases of the past decade.

The existence of the two separate, confidential investigations was revealed in legal documents filed in ongoing litigation involving a $200million settlement for Kentuckians sickened by the diet drug fen-phen, and in the $84million settlement for people abused by Covington diocesan priests.

The bar association also declined to comment on the investigations, citing the same rules. One of the ways a disciplinary matter can become public is when a bar trial commissioner makes a recommendation for disciplinary action, an association spokeswoman said.  The investigation into Chesley's conduct involving the diet-drug settlement was publicly disclosed in a trial commissioner's recommendation that Lexington lawyer David Helmers be suspended from practicing law for five years.

The report, dated Aug. 12, states the disciplinary charges against Helmers were to be heard in November 2009 along with those against Chesley. During the hearing, the report states Chesley argued successfully to disqualify the trial commissioner from hearing the charges against him.

Although the report doesn't state why the trial commissioner, Roderick Messer, recused himself, his son is employed at a law firm that has worked in collecting the $42million civil judgment against three disbarred Lexington lawyers involved in the diet-drug settlement.

Chesley, who was paid about $20million in fees for his role in the diet-drug settlement, was also named as a defendant in the civil suit. Although a judge ruled in June 2007 that Chesley wouldn't be allowed to keep all his fees, the portion of the civil case involving Chesley has been put on hold while the plaintiffs wait for a ruling from the Kentucky Court of Appeals on an issue in the case.

Chesley testified in the federal criminal trial of the three lead attorneys in the fen-phen case that his role was negotiating the settlement with lawyers for the drug maker. He said he wasn't aware of how the money was distributed to the people who got heart-valve damage from the diet drug. Two of those lawyers were convicted of wire fraud and sentenced to prison.  The second investigation became public when a priest sex-abuse victim filed a federal lawsuit May 27 in Covington against Chesley, his law firm and a law partner claiming that Covington Diocese sex-abuse victims were awarded less if they didn't object to the attorneys fees being paid. The suit was filed without the aid of a lawyer.

When the suit was filed, it included an exhibit that was a Kentucky Bar Association document dated December 2008 that confirmed a 'disciplinary matter' arising from Chesley's representation of sex-abuse victims. The document was a protective order issued by the chairman of the Kentucky Bar Inquiry Commission to keep private the names of sex-abuse victims who were to be called as witnesses in a disciplinary case against Chesley.

The exhibit has since been removed from the public record because it contained information about a confidential bar investigation, according to federal court clerks. U.S. District Judge Danny Reeves granted a motion on Tuesday by Chesley's lawyers to seal all future proceedings in the case.

An executrix of a sex-abuse victim's estate has also filed a similar federal suit that names Chesley as one of the defendants.

In a letter to The Enquirer, Chesley's attorney said the allegations outlined in the suits are false and that he plans to file a motion to dismiss them. A federal judge has set Monday as the deadline to file such a motion.

Benton said a judge, and not Chesley, set the attorney fees in the sex-abuse case and that two independent settlement managers, one being a retired federal judge, determined how much each victim received.

'It should be fairly obvious that the information contained in the … complaints is untrustworthy and without foundation,' Benton wrote. 'If you delve into this matter, you will have every reason to doubt the truthfulness and veracity of the plaintiffs who filed these two complaints.'  Benton attached the criminal background history of the executrix to his letter and the multiple bankruptcy/creditor suits against the sex-abuse victim. Benton wrote in a second letter to the Cincinnati Enquirer that publishing the allegations in the suits would 'injure the reputations' of Chesley and another lawyer in the same firm. The letter stated suits were sources of 'untrustworthy information.'

While the two people who filed the suits declined to speak with The Enquirer, they filed identical addendums to their federal suits July 16 in which they alleged that Chesley and his lawyer have committed libel, slander and professional misconduct in trying to discredit them.

'The aforementioned violations go beyond personal slanderous, malicious, defamatory, and libelous attacks on plaintiffs,'  the addendum read. 'They are brazen examples of the professional misconduct that continues with these attorneys. Their violations are brazen and unethical and illegal, and they are daring the court to stop them.'"
________________________________
There is so much going on here, it is breathtaking in its scope and potential.

As I said before, I do not know Stanley Chesley, but I was a personal beneficiary by virtue of attendance at more than one of his lectures on continuing legal education topics particularly "discovery of incriminating documents."    If you want to read the dirt on Chesley from the perspective of the defense Bar you will do no better than Ted Frank's blawg which is consistently filled with anti-plaintiff vitriol written by Frank, a brilliant lawyer and polemicist.

It is my opinion that at the top of any of these high end plaintiffs' practices, Chesley et al., there is a scale of arbitrary exercise of ego in the decision making that directly effects the lives of clients which can perpetrate harm and result in just such an orgy of chaos and scandal.  Please be clear, I am not saying that happened here, but in my personal experience, particularly when you are dealing with clergy sex abuse victims, you are already dealing with persons who were severely injured, exploited and harmed.  Some of what is echoing around the edges of this story is some ferocious personal attacks upon the character of clients who were already profoundly injured by their clergy.  The attempt by Chesley's lawyers to discredit the clients that complained to the bar associations sounds awfully similar to the tactics of the church circa 15-20 years ago.  These lawyers should bear in mind, how well that worked out for the church.

But there is a much larger story about lawyers, greed and ego the scale rarely plays out as markedly as it promises to play out in this case.  Chesley is an accomplished senior lawyer with a sterling legacy.  Chesleys' connections to politics and the courts and class action practices is exhaustively explored by Ted Frank, and you can also read Chesley's wikipedia entry at the link.  The point is, this story suggests to me the potential for a sea change in Class Action administration and collapse of a admirable reputation built up over several decades.
Posted by Anonymous at 7:35 AM