Baptisms for the Dead, Back Injury Lawsuit 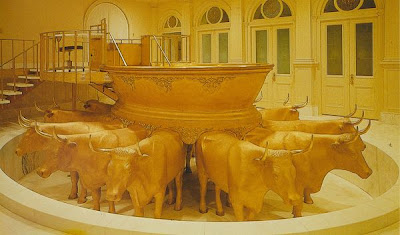 The Salt Lake Tribune is reporting that a Mormon fromer-law student is suing the Church of Jesus Christ of the Latter-Day Saints over a back injury he sustained while performing "Baptisms for the Dead," explanation at link.  This is from reporter Jason Bergreen's account:

A Las Vegas man is suing The Church of Jesus Christ of Latter-day Saints for medical expenses after he injured his back in 2007 performing baptisms for the dead.

In a civil suit filed in 3rd District Court on Wednesday, Daniel Dastrup claims he suffered a severe herniated disk in his lumbar spine after performing about 200 baptisms on Aug. 25, 2007. The then 25-year-old claims some of the young men and women he completely immersed in water in the name of the dead weighed as much as 250 pounds. [Mr. Dastrup allegeshe] asked to be relieved, an officiator at the LDS temple in Raleigh, N.C., where the baptisms were performed, told Dastrup to continue, the civil suit states. [ . . .]
[Mr. Dastrup] later learned [he had a] herniated disk and had to undergo two spinal surgeries, according to [his law]suit.

Dastrup claims the church breached its duty by 'not warning the plaintiffs that the repetitive motion required for performing baptisms for the dead could cause serious damage to a person’s back and by not allowing Mr. Dastrup to stop and be relieved when he and his replacement requested on multiple occasions that they be switched out.'

Dastrup, who also listed his wife as a plaintiff in the case, claims the injury has affected his relationship with her, and the pain has forced him to quit law school and change his lifestyle.
_______________________________
This is an interesting lawsuit.  Lots of questions arise, for instance: the accident happened in North Carolina, the plaintiff is a Nevadan, suing in Utah.  The injury occurred 3 year ago.  As a former law student, my head spins with "issue-spotting" follow up questions.  Why isn't this a North Carolina workers' compensation claim?  What "law" applies?  North Carolina?  Nevada?(unlikely) or Utah?  You get a sense from this fact pattern why law students lose their minds.
Posted by Anonymous at 10:05 AM