Disciplinary Charges in KY Against Stanley Chesley Over Fen-phen Scheme?

The Bad Lawyer blawg previously reported on some of the attorney disbarment and jailing in the aftermath of the Fen-phen class actions and fraud.  In summary, some Kentucky lawyers were involved in attorney fee "enhancements" out of massive amounts of money obtained in class action settlements of the diet drug Fen-phen which was determined to be a risk of cardiac death.  The last Bad Lawyer post in May reported on the jailing of the legendary Kentucky attorney, Melbourne Mills in the multi-million dollar theft of fees and is at the link.

As you will recall, these Kentucky lawyers created an illusory charitable entity in which they diverted most of the class action settlement proceeds that they then personally withdrew millions from without disclosing to their clients.  Another example of unvarnished greed. 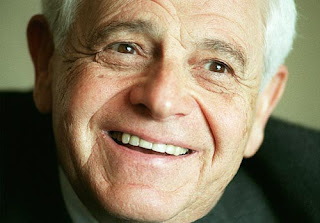 The Louisville Courier-Journal reports this morning, that David Helmers, one of the associate attorneys involved in the scandal of thieving class action attorneys is recommended to receive a 5 year suspension of his law license for participating.  But the big story is the revelation that Kentucky is pursuing disciplinary charges against famed, Cincinnati class action attorney Stanley Chesley (pic).

Chesley is famous for his role in the first great mass tort class action, the 1977 Beverly Hills Supper Club fire which resulted in $49 million dollars in verdicts against the entire aluminum wiring industry.  He has won billions--yes with a "b," in the years since.  I've heard Chesley speak many times over the years on various subjects and he was endlessly instructive on how to prepare a case for trial.
Posted by Anonymous at 7:45 AM