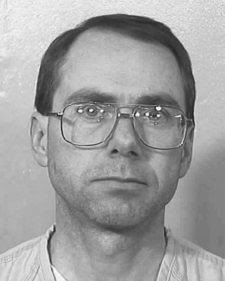 Bob Doucette at the Oklahoman reports that, Terry Nichols, the asshat that aided and abetted American Terrorist, Timothy McVeigh, the Alfred P. Murrah Federal Building bomber who murdered 168 men, women, and children in Oklahoma City on April 19th, 1995-- lost his pro se federal civil rights lawsuit over the quaility of his prison diet.  This is Doucette's story:

Nichols, 55, had claimed in legal filings that he needed a diet of raw vegetables, fruit and whole grains that wasn't typical of prison fare.   Nichols claims that he has a medical condition which requires such a diet, and contends his Christian belief "is that God created our foods to be consumed in their whole unrefined state."

By not being provided this diet, Nichols claimed, his constitutional rights were being violated. [Judge] Arguello disagreed, saying that Nichols hadn't proved his diet qualified as 'cruel and unusual punishment,'and also wrote that there wasn't any proof that the prison diet violated his Christian beliefs.