Georgia's No Guns In Pews Law, OK, for Now 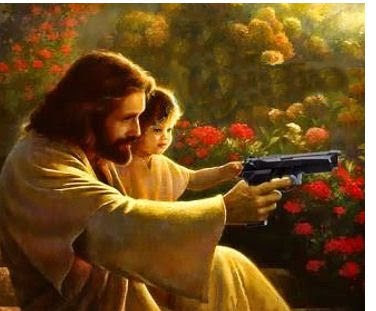 The Atlanta Journal-Constitution is reporting that Georgia's oppressive ban on firearms in pews can stand till further review of a lawsuit file by pro-gun groups and a local pro-gun Baptist minister are heard on the merits by the Court.  That's right friends, some of my homeboys want the right to pack a piece, (not pass the peace) in Church.  This is reporter Rhonda Cook's account:

"A [U.S. District] judge on Monday declined to block enforcement of a new Georgia law that bans guns in places of worship, but he also rejected a request to dismiss the suit brought last month by a group seeking to make the law less restrictive.

'It's not at all discouraging,'  said John Monroe, the attorney who filed a lawsuit on behalf of a minister at a Thomaston church and GeorgiaCarry.org, gun-rights advocacy group.

U.S. District Judge C. Ashley Royal, in a 30-minute hearing, said he would base his final decision on the outcome of the lawsuit only on the writings submitted by Monroe and the attorney for the state and Upson County, where Thomaston is the county seat.

[Judge] Royal's ruling on the case likely won't occur this summer. Whatever his decision, legal analysts expect it to be taken to the 11th U.S. Circuit Court of Appeals, and eventually to the U.S. Supreme Court. The lawsuit was filed in early July, almost two weeks after the Supreme Court ruled 5-4 that the Second Amendment's guarantee of an individual right to bear arms applied to state and local gun-control laws. The court said the Bill of Rights ensured a person could have a gun in the home for protection. The justices, however, left open to state and local governments as to where the lines could be drawn beyond the home.

GeorgiaCarry.org; the Baptist Tabernacle of Thomaston; GeorgiaCarry.org former president Ed Stone and the Rev. Jonathan Wilkins filed suit against Georgia's exemption for churches, saying church employees and worshipers should be allowed to arm themselves for safety.

They are citing the First Amendment guarantee of freedom of religion and the Second Amendment promise of a right to bear arms.  The case is believed to be the first in the country to be filed after the U.S. Supreme Court ruling. Groups on both sides of the debate had predicted the next court fight over guns would center on the issue of bringing firearms into churches, synagogues, mosques and other places of worship.

According to the suit, the new Georgia law -- called the 'church carry statute' -- prohibits Wilkins from having a weapon for protection when he is working alone at the church or when he is on the pulpit. In filings, the minister said he was having  'to choose between two constitutional rights.' 'The handgun is the quintessential self-defense weapon in the United States,'  the suit said.

Firearms in places of worship moved to the front of the fight over more restrictive and less restrictive gun laws when the 2010 Georgia Legislature attempted to replace the prohibition of guns in 'public places' with language that was more specific. The revised law says guns are not allowed in places of worship, government buildings, schools, nuclear power plants and bars without the owner’s permission.

The judge said the 'places of worship'  reference in the law is vague. 'A very plausible argument can be made ... [that] this statute deprived this man of being able to protect himself at work,' Royal said.

The complaint was initially filed in Upson County Superior Court but the case was moved to the U.S. District Court in nearby Macon.  According to the suit, Stone, Wilkins and others want to be able to arm themselves while worshiping  'for the protection of their families and themselves'  without fear of arrest and prosecution. The suit also said Wilkins needed to have a gun for his own protection while working alone at the Baptist Tabernacle and during services 'for the protection of his flock, his family and himself.'

But he is afraid he will be arrested and prosecuted if he brings a gun into the church, the suit said. 'The Tabernacle would like to have members armed for the protection of its members attending worship services and other events at the Tabernacle's place of worship,' [according to the law suit.]"
_________________________________
You'd think that Reverend Wilkins would be little less concerned about his Second Amendment rights and a little more concerned with the Beatitudes, Matthew 5:5,9--would be a good start.
Posted by Anonymous at 2:20 PM