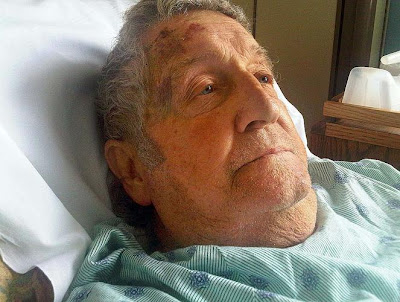 Reporter Gary Haraki at the Charleston Gazette reports on the local man who had his ass kicked by a local cop apparently because this alleged bad outlaw did not hear the officer order him to get off of the ATV he was riding.  Having had my ass kicked and pepper-sprayed by OurCounty Sheriff's deputies while I was in handcuffs for the crime of being a smart-mouthed lawyer at the local courthouse, I immediately empathized with 80-year old, Bob McComb.  Haraki's account follows:

"An 80-year-old man spent three days in the hospital after he was dragged off his ATV and slammed to the concrete by a Cedar Grove police officer, witnesses say.

On Tuesday, Robert McComb was riding ATVs with his friends, Darrell Cole and Bobby Palmer, and was heading back to his house after coming out of the woods when he was stopped by a Cedar Grove police cruiser.   The police officer pulled up beside McComb's ATV and stopped.   'I think Bob thought he was trying to let us by, so he kept going,' said Palmer, who was riding an ATV behind McComb. 'I thought the same thing.'

But when McComb kept driving, the officer in the cruiser, Johnny Walls, chased McComb down.

McComb was ahead of Palmer and Cole. When both men caught up to McComb and Walls, the officer was picking a bloody McComb off the ground.   Carrie Balser said she watched what happened to McComb in horror as she sat in her truck with her husband, Bruce.  She said Walls grabbed McComb, pulled him off of the side of the ATV and slammed him to the concrete face-first.  She said she and her husband got out of their truck when they realized it was McComb.  'What he [Walls] did was very horrific,'  she said. 'He [McComb] hit so hard face-first in the concrete.'

Carrie Balser said she tried to give a statement about what she saw to Cedar Grove police, but they refused to take it. She said she was told she had to give her statement to the chief - Johnny Walls. Palmer said that when Walls stood McComb up, blood was dripping down McComb's face from a gash on his forehead.  'The skin was torn off his right arm and he was shaking like a leaf,' Palmer said. 'Bob didn't deserve what that cop did to him.'

'He's not real agile; he doesn't move too fast. He had both knees replaced, the last one about six months ago,' Cole said. 'When I watch TV with him, he turns it up to 100 to hear it - he's hard of hearing. ... So this police officer is trying to get him in the car and [McComb's] talking loud: 'I told you I can't move my legs.'

Cole said he thinks that McComb's difficulty hearing might have led to Walls pulling him off the ATV because McComb might not have responded to the officer.

'The reality is that it's totally unacceptable,' Karen McComb said. 'There is no reason ever to brutalize an 80-year-old man. He wasn't drinking. He wasn't drugging.'  She said she had her father's blood tested for alcohol at the hospital, to have as proof later. The tests came back negative. Robert McComb suffered a moderate to severe concussion, in addition to scrapes and bruises to his head, arms, legs and back, she said.  'He can't lift his right arm at all, unless he uses his other hand to pull it up,'  [Ms. McComb] said.

Robert McComb said he can't recall anything of the incident. He said the last thing he remembers is riding his ATV with his friends.  'When I came to my senses, I was in the emergency room, it was 4:30 a.m. My daughter was standing beside me,' he said. 'My mind is clear now. I remember everything before it all happened, no problem. It's just the matter of those hours in between - I couldn't say what happened.'

On Friday, when McComb returned home to Cedar Grove from the hospital, a summons from Walls to Kanawha County Magistrate Court was waiting.  Robert McComb said he is charged with speeding, resisting arrest, obstructing an officer and fleeing an officer.

Cole said they were driving about 50 feet on a small side road that used to be a parking lot. He said there was a 'Do Not Enter' sign, but that it was how all the ATVs in the area access that part of town - the alternative was to drive on the main road.  'It's like he was singled out,' Cole said of McComb.  Cedar Grove residents held a candlelight vigil for McComb Saturday evening.

On Friday, a resident called the Gazette-Mail to talk about what happened to McComb.

'I won't give you my name, I'm a widow and I'll probably be hassled,'  she said. 'I think it's terrible that this little town, [it's] one of just a hundred little towns that has such poor police protection. We're just tired of all this. He [Walls] is really bad, and the other two [Cedar Grove officers] aren't much better.'  Walls had been with three departments before going to Cedar Grove in April 2008, according to state records. His career started in Chesapeake in 2003. He was with the Lincoln County Sheriff's Department from August 2006 until January 2007. He worked at the Winfield Police Department from October 2007 to February 2008.

A message left for Walls at the Cedar Grove Police Department on Friday went unreturned.

McComb said he has been taking that road back to his house since he bought an ATV in 1999. 'I think it's a cheap act from the police officer,' McComb said. 'I think he's not very professional, and he shouldn't be on the police force, as far as I'm concerned.'"
_____________________________
West Virginia is wild and wonderful as advertised.  It has this strange law enforcement system that crops up again and again at the local news websites, local cops with appalling disciplinary or criminal violence end up getting hired and rehired in small town or villages.  You see this perilous pattern in places other than West Virginia but it is strikingly the case in the great mountain state.

Here's hoping the McComb family sue the town of Cedar Grove out of existence.
Posted by Anonymous at 8:30 AM