The "Box Cutter" Gets 433 Years Plus 21 Life Sentences

KTLA in Los Angeles is reporting on the sentencing of the "slasher" dubbed the "Box Cutter,"  Charles Juan Proctor.  Here is the story, and I think we can all be grateful for the outcome:

A 45-year-old transient dubbed "the box cutter" for a series of slashings that terrorized women in Long Beach during a 2008 crime spree was sentenced to 433 years plus 21 life terms in prison.  Charles Juan Proctor (pic) was convicted earlier this month on 22 felony counts including robbery, kidnapping and attempted murder.  Proctor was charged with six robberies that targeted women who were alone inside businesses. Prosecutors say all of the women were held at the point of a knife or box-cutter during the robberies. 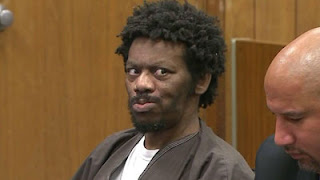 Two of the victims fought back during the attacks and suffered slash wounds to their throats.  One of the women, Saida Uriarte, says she is still haunted by what happened to her. 'Every time I look into the mirror I am reminded of this awful event,' Uriarte said in her victim's impact statement read Monday by Deputy District Attorney Carol Rose.

The other victim, Jennifer Wrenn, told Long Beach Superior Court Judge Gary Ferrari she also struggles with the aftermath of the attacks. She said she suffers from flashbacks and has a hard time focusing at her job. Wrenn testified during the trial that Proctor dug the razor into her neck to drive it deeper nearly killing her.

'You inflicted great violence on at least two victims, nearly killing one of them,' Judge Ferrari said.

Judge Ferrari sentenced Proctor to a base term of 433 years and four months in prison. 10 of the 21 life sentences imposed on Proctor were stayed or ordered to be served concurrently.  That means that Proctor must serve the 433 year base term before he begins serving the 11 consecutive life terms, Rose explained.

The judge also ordered Proctor to pay more than $56,000 in victim restitution fines and court fees.  The attacks were carried out between February and May 2008. Five of the locations were in Long Beach and one victim was robbed at a hair salon where she worked in Hawaiian Gardens. News of the attacks, and the vicious nature in which two of the women were slashed, spread rapidly into the area leaving women on edge."
__________________________
Frightened?  I am.  It's probabaly too much to hope that he doesn't harm prison employees and inmates.

Usually, these fantasy sentences are ridiculous, this is one that actually gives me a sense of relief.
Posted by Anonymous at 1:03 PM