From NOLA.com: Bounce a Check to the Funeral Parlor, That'll Be a Jailin' 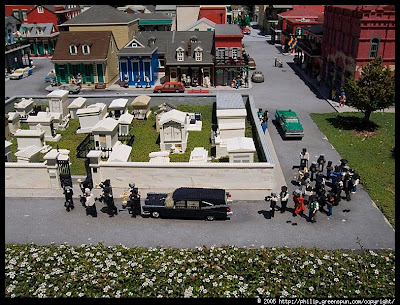 "Brenda Harris Simmons left this world on Sept. 4, 2008, at age 65, and was buried a week later after funeral services held at a Baptist church in Algiers. Almost two years later, her husband is charged in state court with writing $9,300 checks to the undertakers that bounced in January 2009.

Share James Simmons, 67, of New Orleans, faces up to ten years in prison if convicted of issuing worthless checks over $500. He appeared in Criminal District Court on Friday, where Judge Terry Alarcon released him on a $100 recognizance bond and then apologized to the senior citizen for having to face charges.

'I've been a judge a long time and I've never done this before, but I'm going to apologize to you,' said Alarcon, a former prosecutor first elected to serve at the Tulane Avenue courthouse in 1996. 'This case is beyond my comprehension. It's an embarrassment to the entire system.'

The judge's usual docket includes murders, robberies and drug-dealing, not the plight of a widower facing prison for trying to properly send off his wife of 46 years, the mother of three. In the case file, however, Simmons is simply accused of purposely avoiding the funeral bill after writing checks that he knew were worthless.

District Attorney Leon Cannizzaro's office accepted the case only after the Murray Henderson Funeral Home in Algiers reported that Simmons had failed to pay a dime since the two separate checks, totaling $9,347, bounced at the bank 14 months after his wife's funeral.

An arrest warrant issued for Simmons said that he 'admitted to the NSF checks and failed to make restitution' to the 101-year-old funeral home, whose owner Constance Selico on Friday declined to comment on the criminal case. Simmons was arrested May 10. He showed up Friday without an attorney. Alarcon asked the public defenders program to represent him, and set a new hearing date for Oct. 1.