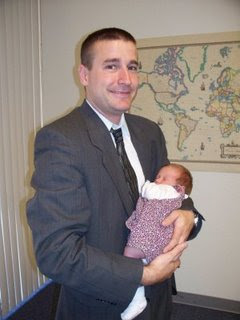 The Yuma Sun is reporting on the acquittal of Baptist Pastor, Steven Anderson (pic, with daughter) who was charged with two misdemeanors after being pulled over at an immigration check point and being tasered when he refused to answer questions about his name and nationality.  This is James Gilbert's story in excerpt for the Sun:

"A Baptist pastor who claimed he was beaten by law enforcement officers at an interstate checkpoint was acquitted Friday of two misdemeanor charges related to the incident.

Steven Anderson, who is minister of Faithful Word Baptist Church in Tempe, was found not guilty Friday afternoon after a two-day trial on charges of obstructing a highway and failure to obey instructions of a law enforcement officer.  'I'm thrilled. I'm happy about it,' Anderson said moments after the verdict was handed down. 'I think it asks the question ‘Why was someone who was found in court not to be doing anything wrong, was brutalized and tasered like I was.'

Anderson did not answer and instead replied that he was exercising his Constitutional rights and did not want to answer any questions. He kept asking if he was free to leave.   A Border Patrol agent referred Anderson to the secondary inspection area after a canine allegedly alerted to his vehicle. However, Anderson refused to move to secondary and stayed in his vehicle even after multiple requests from both Border Patrol agents and officers with the Department of Public Safety.

'I was exercising my Constitutional rights. I knew they wouldn't find anything and they didn't,' Anderson told the Yuma Sun. 'It is an unconstitutional checkpoint and I basically refused a warrantless search of my vehicle.'  He added: 'I wasn't the one blocking the highway. I was asking to leave, but they wouldn't let me.'  Anderson said the DPS officer and Border Patrol agents eventually broke both windows of his vehicle, tasered him, dragged him out of his car and slammed him onto the ground.   He received 11 stitches and had visible scabs on his forehead following the encounter.

Anderson's trial was held before Justice of the Peace Pro Tem Yolanda Torok in Yuma Justice Court. The jury, composed entirely of Wellton residents, returned its verdict after about three hours of deliberation.

Anderson said prior to the verdict that if he was found guilty, he felt that it would be another example of the government taking rights away from its citizens.  'If the Fourth Amendment of the Constitution doesn't matter, what is next? Take away the First Amendment?' Anderson said. 'Give the government a inch and they will take a mile. As soon as you allow the government to violate and take away your rights it will.'  He stressed that he felt checkpoints along Arizona's highways bring Arizona one step closer to becoming a police state.

'It is Nazi Germany. Show us your papers,'  Anderson said.

Judge Torok previously dismissed the case in December 2009 after testimony in an evidentiary hearing revealed that Border Patrol canine training records, which were available, had not been provided to the prosecution as requested.

Because the defense had requested the same records, but did not receive them either, it made an oral motion during a June hearing to dismiss the charges, claiming it hadn't been given all the evidence in the case.

During a recess in the hearing the prosecution obtained a copy of the canine training records and provided it to the defense. However, after reconvening, the judge ruled that the prosecution failed to provide the records to the defense in a timely manner and dismissed the case with prejudice, which meant charges could not be refiled.  The prosecution appealed the ruling to the Yuma County Superior Court before Judge Maria Elena Cruz. Cruz overturned Torok's ruling and the charges against Anderson were refiled, with further proceedings to take place in Justice Court.

The defense had argued that Anderson was charged with criminal acts that occurred as the result of an unlawful stop and detention. Cruz in her ruling determined that the canine training records were 'irrelevant' because Anderson's alleged criminal conduct happened prior to his initial detention."
________________________________
You getting this, pro-SB 1070 commentators?  Remember, this is what you'll get with Sheriff Joe immigration policies.  This is your future.
Posted by Anonymous at 8:59 AM