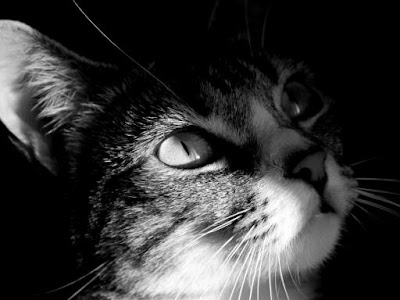 Reporter Todd Cooper at the Omaha World-Herald reports on the Nebraska man going to prison for 4 years for terrorizing and killing his Aunt's cat:

"A cat killer will spend four to 10 years in prison for a turbulent February night in which he threatened his aunt, fired a shotgun and fatally stabbed a feline in the head.

Douglas County District Judge Patrick Mullen sentenced 20-year-old Matthew Pokorny to eight years, eight months to 20 years in prison -- a term that is cut in half under state sentencing guidelines.

On Feb. 9, Pokorny threatened the aunt he lived with near 48th Avenue and Y Street. He stabbed her cat, Jasper, in the head, then pointed a shotgun at his aunt. He pointed it away and then fired -- hitting a car parked outside.

[Judge] Mullen gave Pokorny the maximum sentence for terroristic threats -- 20 months to five years in prison.  The judge sentenced him to six to 12 years in prison for weapon use. And he sentenced him to one to three years in prison on a felony count of cruelty to animals.   Pokorny, who was evaluated by psychiatrists and described as bipolar, had a record of disorderly conduct and threatening behavior."
________________________
Cruelty to animal stories abound on the Internet along with cute animal pictures.  Like you, my humanity screams out about such acts, but you'll notice I rarely if ever pass along these stories.  Part of the reason for that is that as a lawyer I never handled a case involving animal cruelty.  Part of the reason is that I'm revolted by the reports, although I find news accounts of cruelty to children, the mentally handicapped and the elderly more relevant to my mission.

I do understand C-RA-Z-Y, though, and this case isn't about animal cruelty, it's about someone who is mentally ill.  The crime against this cat is appalling and disgusting, but it is a manifestation of clear mental and emotional illness and the incarceration of this pathetic creature seems misguided.  Hospitalization seems in order.
Posted by Anonymous at 3:22 PM