As I Said, Some Stories Need No Further Comment , , ,

Buzz up!Twitter FarkIt Type Size A A A 2:05 P.M. — A Lehigh Acres woman is accused of trying to hide crack in her panties.  Lee County deputies say they found it after some of the rocks fell out during a search following a traffic stop. 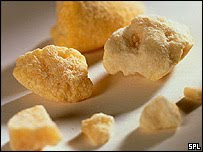 Britney Andrews, 21, of 2426 Ted Ave. was charged Friday with possession of crack cocaine, tampering with evidence and possession of drug paraphernalia.  Deputies pulled over the gold Acura Legend she was riding in after noticing a faulty tag light.
The driver, Jerry Coleman, then allowed Lee County deputy Joshua Quaintance to search the car and Andrews complied.  When Andrews exited the car with her infant and a diaper bag, Quaintance saw a measuring cup with some small white pieces and a cloudy liquid inside. It later tested positive for cocaine. He then placed Andrews under arrest for trying to conceal the measuring cup.
At that point Quaintance asked Andrews if there was any more drugs on her. She said no.  As another deputy began to search Andrews, small white rocks began falling from her pants. Once the crack hit the pavement, Andrews attempted to grind them up with her foot.
More rocks were later found in her underwear.
Andrews infant was released to the custody of her mother.  Coleman was then charged with possession of drug paraphernalia.
______________________________
How embarrassing!
Posted by Anonymous at 6:58 AM