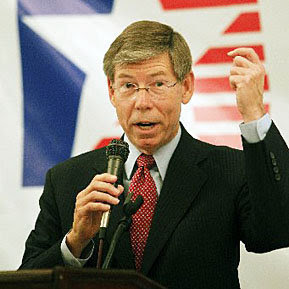 The Miami Herald leads with the story that Gubernatorial candidate, Attorney General Bill McCollum's proposal to incorporate Arizona's immigration bill into Florida law with enhancements designed to make the tax payers pay room and board at the Gray Bar Hotels throughout Fla. once it is determined that these folks can't establish their identities.  Nice!

You all remember McCollum, the Mickey Mouse congressman from Orlando who served as a prosecutor at the impeachment trial of President Clinton.  Real sweetheart of a guy.  Went to Big Law after an unsuccessful bid for the U.S. Senate, now he wants to be Florida's Governor until something better comes along. His big problem, the Tea Party folks know he's a Republican hack and they don't want anything to do with him.  So in typical political fashion there is no position too extreme for McCollum to adopt including the AZ immigration-plus strategy.  That ought to work!

Oh, McCollum is a practiced-hand at this "aspirational law"-stuff.  He was one of the first state AGs to file an anti-health reform lawsuit.   These guys are shameless.
Posted by Anonymous at 5:53 AM