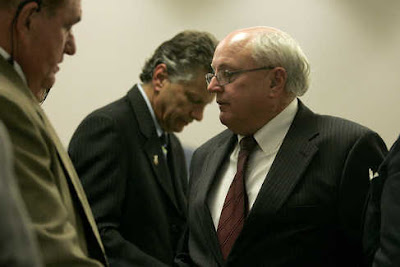 The Charlotte Observer is reporting that a Myrtle Beach lawyer is going to prison for 3 year following his guilty plea for trying to hire someone to kill a colleague.  Now, I don't care how pissed you are at opposing counsel, this seems slightly extreme.  The Observer's report follows:

"A South Carolina attorney will spend three years in prison after pleading guilty to trying to hire someone to kill another lawyer.  Multiple media outlets reported that 59-year-old Irby Walker was sentenced Monday after pleading guilty to solicitation to commit a felony.  Walker was arrested in September after authorities said he tried to hire someone to kill Doug Thornton, another Conway attorney.

In September, police say they recorded conversations Walker had with another person about how much Walker would be willing to pay to have Thornton killed. The men have known each other since 1982. Thornton said he shared an office with Walker until 2006."
___________________________
Oh, they shared an office.  Bet there's an argument over fees or who owes on the copier contract.

The more comprehensive story is at the link to the Myrtle Beach Sun News.
Posted by Anonymous at 8:11 AM