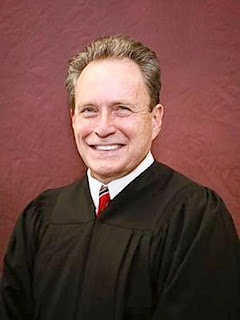 Reporter Rene Stutzman at the Orlando Sentinel brings us up to date on the story of the Osceola, Florida Circuit Judge who made a name, (Bad Lawyer featured the initial report on Judge Turner back in May), as a employment sexual harassment lawyer and now is suspended from the bench after allegations of sexual harassment.  This is Ms. Stutzman's current account:

"Circuit Judge N. James Turner hasn't worked since April because several women have accused him of sexually harassing them at the Osceola County Courthouse. It's an issue with which he's extremely familiar: He spent much of his career suing companies on behalf of women who made sexual-harassment claims.  He sued a theme park on behalf of a store clerk who claimed her boss put his hand up her dress in front of customers. He sued a restaurant chain for a woman whose job was to roll silverware in napkins and complained that a manager-trainee touched her buttocks and thighs. He represented a cocktail waitress who claimed her boss made her bend over so he could look up her dress.

The irony is not lost on Turner. He says the allegations against him by the women at the courthouse are false.

'I've hugged women in the office as a friendly gesture, as an act of compassion,'   Turner, 64, said in an interview this month. 'I may have, in that situation, kissed someone on the cheek. I may have put my hand on someone's shoulder … in a time of severe stress, but none of it was inappropriate.'

Turner, who lives in Orlando, is accused by the state agency that polices judges, the Judicial Qualifications Commission, of a laundry list of wrongdoing. Among the claims: running an unethical campaign for office, putting his feet on the bench during hearings and ordering an underage offender to hand over a piece of jewelry to cover court costs.  But allegations about how he treated women at the courthouse will likely get a great deal of attention this week as the women are deposed, placed under oath and forced to answer questions by Turner's attorney, Barry Rigby.

Once they're cross-examined, Rigby said, their complaints about sexual harassment may sound more benign than lewd.  According to the formal charges against him, Turner hugged, kissed and massaged women at the courthouse. He also went to their homes and involved himself in their lives uninvited, the JQC alleges.

The women include a 42-year-old Kissimmee deputy clerk of courts, who complained about Turner hugging and kissing her and coming to her home. But in defense pleadings, Rigby wrote that the judge was merely being a compassionate friend 'and such actions were welcomed and appreciated.'

Prosecutors accuse him of improperly lending money to another woman, his then-secretary.

Yes, Rigby said, the judge gave a loan to the 34-year-old single Orlando woman. She has two children, was facing a family emergency and asked for the money, he said. She also quit two months later, and, Rigby said, has never repaid it. She is now accusing Turner of, among other things, screaming at her in the office. That woman now works at the juvenile court on Michigan Street in Orlando.

Those women are not identified in public JQC pleadings and would not discuss their allegations with the Orlando Sentinel, which has decided not to publish their names.

Turner was elected circuit judge by voters in Orange and Osceola counties two years ago. Before that, he was a well-regarded Orlando attorney who specialized in employment discrimination and sexual-harassment cases.  In 1994 and 1997, The Florida Bar Journal published articles he wrote about sexual harassment. His 1997 article was called 'The Perils of (Reporting and) Not Reporting Sexual Harassment.'"
______________________________
Judge Turner was previously featured on Bad Lawyer, this is a more comprehensive update on the allegations against him.  I can't help feeling that Judge Turner is an example of unchecked ego.  When he was a practitioner he was doubtlessly charismatic and perceived in a way that is at odds with the way he's viewed as a Judge.  Behavior he got away with as an attorney that was undoubtedly inappropriate, but tolerated is intolerable coming from a Judge.  This is ego, unchecked.
Posted by Anonymous at 6:13 AM