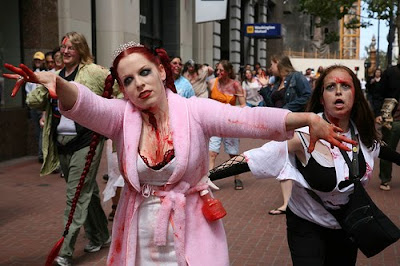 The Minneapolis Star Tribune is reporting on the Minneapolis City Council's  decision to settle the First Amendment lawsuit of locals dressed as Zombies who sued over their 2006 arrests in downtown while protesting mindless consumerism.  This is reporter Randy Furst's account:

"The Minneapolis city attorney's office has decided to pay seven zombies and their attorney $165,000. The payout, approved by the City Council on Friday, settles a federal lawsuit the seven filed after they were arrested and jailed for two days for dressing up like zombies in downtown Minneapolis on July 22, 2006, to protest 'mindless'consumerism.

When arrested at the intersection of Hennepin Avenue and 6th Street N., most of them had thick white powder and fake blood on their faces and dark makeup around their eyes. They were walking in a stiff, lurching fashion and carrying four bags of sound equipment to amplify music from an iPod when they were arrested by police who said they were carrying equipment that simulated 'weapons of mass destruction.'

However, they were never charged with any crime.

Although U.S. District Judge Joan Ericksen had dismissed the zombies' lawsuit, it was resurrected in February by a three-judge panel of the Eighth U.S. Circuit Court of Appeals, which concluded that police lacked probable cause to arrest the seven, a decision setting the stage for a federal trial this fall. The settlement means there will be no trial.

'I feel great that the city is being held accountable for the actions of their police,' said Raphi Rechitsky, 27, of Minneapolis, one of the seven zombies, who said he and his friends were performing street theater when they were arrested. He is a Ph.D. candidate in sociology at the University of Minnesota.

Minneapolis City Attorney Susan L. Segal said it was in the best interests of the city to settle. 'We believe the police acted reasonably, but you never know what a jury is going to do with a case,' she said. If a jury had concluded that the seven plaintiffs' constitutional rights had been violated and awarded $50,000 to each, plus defense attorney's fees, 'it could have been quite substantial,' Segal said."
______________________
I don't know, I don't think of Minneapolis as a place of intolerance.  What prompts law enforcement to make arrests like the arrests made in this case?  Stupidity?
Posted by Anonymous at 8:11 AM