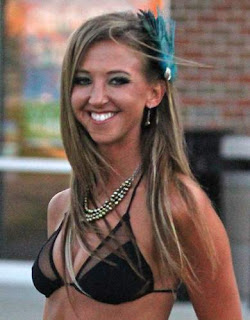 Ms. Jones told the Kentucky Enquirer, "This is not a publicity stunt, this is not for media. I don't want my face out there. I want to teach, and that is all I want to do."

U.S. District Judge William Bertelsman entered the default  judgment against Dirty Word Entertainment Recordings last week, it remains to be seen whether Ms. Jones' attorney Eric Deters sued the correct defendant or beyond a publicity coup, whether he will be able to collect his judgment.  I have my doubts.

Attorney Deters, alleged in the suit that the California limited liability corporation that does business under the name Thedirt.com, and the website which ran a story saying Ms. Jones had two venereal diseases carried disclaimers noting that the information came from an ex-boyfirend (nice!)  Want to date this "prince?"

Thedirty.com, is run by some character named, Hooman Karamian.  He isn't responding to media inquiries, but he wrote on his website that Ms. Jones sued the wrong company.  Mr.Karamian, also goes by the name Nik Richie, is a named defendant in the case, but Mr. Deters did not get "service" on his complaint and so does not have a default against Karamian, personally.

Ms. Jones says she is using the publicity as a "teachable moment" since her students are abuzz with the story, the gossip, and the pictures from the Internet. "I decided I had nothing to hide. [no kidding!] There is nothing I need to back down from."

Ms. Jones teaches four English classes of 15-year-olds.    Good luck, on that!
Posted by Anonymous at 10:12 AM