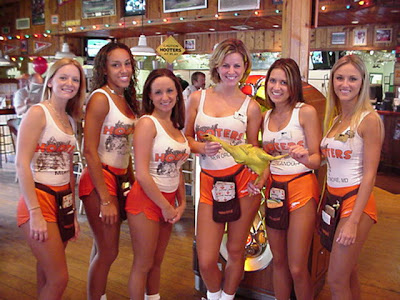 A Michigan judge has ruled that two Hooters' waitresses can proceed with their weight-based discrimination lawsuit.  This story is from ClickOnDetroit.com:

A Michigan judge has given the go-ahead to lawsuits by two ex-Hooters waitresses who say they were fired because of their weight.

Cassandra Smith, 20, has worked at the Hooters in Roseville for two years. During an annual employee review in June, Smith said two women from the company's headquarters in Atlanta joined her bosses via conference call.  Smith said she was complimented on her attitude and customer service skills, but that during her uniform evaluation the women mentioned that her shirt and short size could use some improvement.

Smith said she is 5 feet 8 inches tall and 132 pounds and is completely comfortable with herself. Smith said the women told her she would be given a free gym membership and had 30 days to improve, and if she did not, she would be separated from the company.

The company's uniforms are offered in small, extra small and double-extra small.

Mike McNeil, vice president of marketing for Hooters of America Inc., said the company has fought several battles to uphold their image, and they are not going to back down from this one.  'We're not afraid of a fight, whether that be from a city, state or a law firm,' said McNeil. [In otherwords, Hooters: "get your stinkin' law off of me"]

Macomb County Circuit Judge Peter Maceroni on Monday denied Hooters' request to dismiss the suit because the waitresses had signed an arbitration agreement. Maceroni says the women may not have knowingly waived their right to sue.

The suit are by Cassandra Smith and Leanne Convery.

McNeil said the company has an image to uphold and that image will not be tarnished because of a state law.

'It matters what they look like in Michigan and we intend to defend ourselves all the way,' he said. McNeil said Smith's lawsuit is baseless and self-serving and that she is ruining her own case. 'In her own words -- the plaintiff has told everybody that would listen that she is 5 foot 8, which is certainly not overweight,' said McNeil."
_______________________________
Do you see how the role that arbitration clauses play in shutting down employment lawsuits?  Remember Sen. Al Franken's takedown of the defense contractors, last year?  It was precisely over the arbitration clauses built into these employment provisions cutting off the rights of workers who are subsequently discriminated against by their employers and supervisors
Posted by Anonymous at 10:46 AM