Lying Will Be a Firing Offense for New Orleans Police 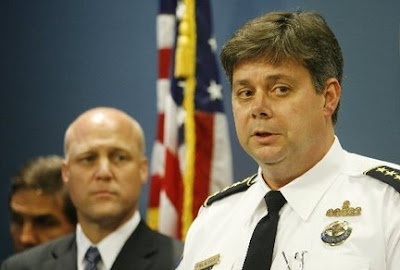 New Orleans police officers who lie while on the job or file a false police report can be immediately fired under new regulations that will go into effect next week.   Superintendent Ronal Serpas (pic with Mayor Landrieu in background) announced the changes, along with several other revisions to the rules governing officer behavior, at a news conference outlining his initial steps to remake the New Orleans Police Department.
Share 'If you lie, you die,' Serpas said, noting that the previous policy would allow lesser reprimands for officers who were untruthful a couple times. 'If you tell this police department a lie about anything, you will be terminated. That has never happened here before.'
In a week when the alleged wrongdoing five years ago of New Orleans police after Hurricane Katrina will be featured prominently in the news, both Serpas and Mayor Mitch Landrieu underscored that they are trying to make improvements that will restore citizen confidence in the officers they interact with every day. There are currently nine ongoing federal probes into the NOPD, many of them stemming from the post-Katrina period.
'In short order, we have made progress on the structure and the culture of the NOPD,' said Landrieu at a news conference also attended by Orleans Parish District Attorney Leon Cannizzaro and NOPD deputy chiefs Arlinda Westbrook and Marlon Defillo.

Serpas said even an internal change like the revision to what is known in the NOPD as the 'truthfulness' policy will end up being felt by New Orleanians. 'When that resonates through our community, it will be easier for our community to accept the word of a police officer,' he said. [. . . ]

The NOPD has already asked various components of the Justice Department for specific help, according to Serpas' document, including reviews of the homicide unit, as well as providing expert help with domestic violence and sexual assault investigations. Following news reports about the prevalence of sexual assault complaints that are not classified as crimes, the NOPD this month asked the Louisiana Commission on Law Enforcement to conduct an audit of the sex crimes division, according to the report. [ . . . ]
Along with the changes to the truthfulness policy, the department will also change the report writing rules, allowing the firing of any officer who files a 'false or inaccurate oral or written report.' At issue in three ongoing cases in federal court against NOPD officers is the accusation that police wrote false information in reports, which prosecutors assert was done to cover-up improper police actions.  Another change, which like the others announced by Serpas will be put into place Sept. 1, is the requirement that all officers report to a supervisor any misconduct they observe by any government employee. If they fail to do so, they can be subject to the same level of discipline as the person who committed the offense. Officers will also be required to cooperate with investigations and not withhold information.

Noting that this week marks the anniversary of Hurricane Katrina, Serpas made direct reference to some of the allegations against police after Katrina, especially the guilty pleas of five former officers in the Danziger Bridge case. Those officers have admitted to participating in a wide-ranging cover-up of a shooting near the bridge in which four people were seriously wounded and two men died.

These actions have overshadowed the great work that many officers performed during the storm, said Serpas.  'The self behavior of people's admitted comments has ripped from the history books the tremendous bravery of so many men and women in this department,'  he said. 'Rightfully so, the insult committed on this community by so many officers is something we can never forget and will never forget.'"
___________________________
This was, . . . is, a very pathological law enforcement agency.  It will take years to uproot all the bad shoots, but this policy is a good beginning. It's almost unbelievable that the police superintendent felt it necessary to publicly announce this policy.
Posted by Anonymous at 1:13 PM