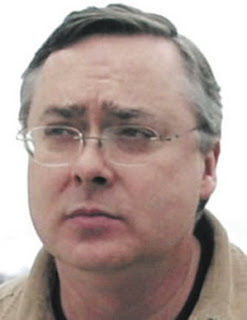 "Three years ago, James M. Cameron held a position of power and trust as the top drug prosecutor for the Maine Attorney General's Office.

His stunning fall from that post began in December 2007, when state and federal agents showed up at his Hallowell home with search warrants for the four computers inside. The fall ended Monday, when a federal judge convicted Cameron on 13 of 15 counts of sending, receiving and possessing child pornography over the Internet.

Cameron, 48, showed no emotion as Judge John Woodcock Jr. read the verdicts that capped the six-day bench trial. The former assistant attorney general was immediately handcuffed and put in federal custody after the ruling. The former state prosecutor, who opted not to testify in his own defense, faces a minimum of five years and a maximum of 20 years in prison when he is sentenced later this year. The Maine State Police Computer Crimes Unit began investigating Cameron in 2007, after Yahoo reported finding child pornography in the photos of an account holder later identified as Cameron's wife. The Yahoo reports were made to the National Center for Missing and Exploited Children in Alexandria, Va., an organization that works with local, state and federal investigators.

Investigators ultimately tied 17 user profiles on Yahoo – many of which had sexually explicit names – to three Internet Protocol addresses assigned to computers at the Cameron household. Prosecutors used data from the computers, including log-in names and times, to determine that it was Cameron alone who was responsible for the illegal activity. Besides images of child pornography uploaded to Yahoo file servers, investigators found explicit images, e-mails, chats and other evidence on the four computers seized from Cameron's home. Cameron engaged in some of the illegal activity from his home computers on days when he was working, prosecutors said. His former secretary testified that Cameron was often away from his office, and those unexplained absences prompted a running joke at the Attorney General's Office, in which someone would ask: 'Where in the world is Jim Cameron?'

Assistant U.S. Attorney Donald Clark referred to that joke several times during his closing argument Monday.  'Where in the world is Jim Cameron? We know the answer. He was at home, on his computer, trading child pornography,'  Clark said.  Clark said Cameron had advanced computer knowledge, and he stored pornographic materials in photo folders on Yahoo so that he could then delete the files from his home computers using a software program called 'Wash n' Go.'

But Cameron was apparently unaware that traces of the child pornography, including images and chats on the now-defunct service 'Google Hello,' remained on the hard drives of the computers and were found by investigators, Clark said.

'If a person wants to collect child pornography, they save it, they don't destroy it,' Cunniff said. He also said the investigation of Cameron was flawed from the start because agents believed him to be guilty and they did not pursue any other possibilities, such as the theory that someone pirated the open wireless signal at Cameron's home. Cunniff noted that one state police detective used the phrase 'stringing evidence around Jim Cameron's neck.'

'No meaningful search for exculpatory evidence was made,' Cunniff told Judge Woodcock.

Cameron was indicted by a federal grand jury in February 2009. He waived his right to a jury, putting his fate solely in the hands of Woodcock, the chief federal judge for the District of Maine.

The trial proceeded slowly as government lawyers and Cunniff argued over rules, procedural matters and the admissibility of almost every piece of evidence.  'The persistence and vigor that I displayed were manifestations of my respect for the law, not disrespect for the court,' Cunniff told Woodcock at the outset of his closing argument. Cunniff had lodged repeated objections based on his argument that Yahoo does not have the right to browse through images posted by users in password-protected folders. Woodcock said the images qualify as business records and Yahoo has the right to inspect them.

Cameron is now divorced from his wife, but they have been working together to raise their 15-year-old autistic son, Cunniff said. Cameron had been free on $75,000 bail before Monday's verdicts.

Woodcock found Cameron guilty on eight counts of sending, four counts of receiving and one count of possessing child pornography. The judge found Cameron not guilty on two counts of sending child pornography."
___________________________
I've been following this story for awhile, now, and I'm not quite sure I understand Cunniff's argument about "business records," nonetheless it is clear that Cunniff aggressively defended Cameron.  I am curious as to how an appeal is going to play out.  If I understand the story, the child porn was in an account belonging, at least in name, to the wife.  Obviously the Judge believed that the federal prosecutors proved that Cameron set up the Yahoo account in her name for his purposes. Still, you have to wonder if a reviewing appellate court will say this factor creates a basis for "reasonable doubt."

Once again, do you need an object lesson in the power of this awful stuff--child pornography?
Posted by Anonymous at 10:22 AM