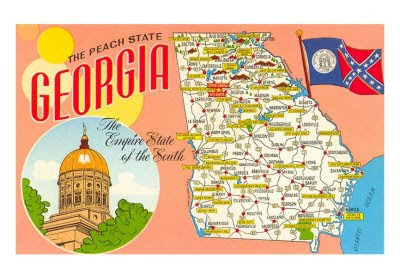 The Atlanta Journal-Constitution has this feature on what it calls the "rash" of Judges stepping down following at least the appearance of impropriety.  This is Bill Tropy and Bill Rankin's story:

"One [Judge] sent a message over Facebook to a criminal defendant, saying he’d give her behind-the-scenes advice on her case. Another was caught having sex in a parked car with the public defender assigned to his courtroom. Another inappropriately touched a prosecutor and investigator after they sat in his lap posing for a photo.

These were not defendants. All three were chief judges in their circuits with decades on the bench.  Since 2008, at least 16 judges across the state have resigned under duress, most recently two veteran chief judges from Cobb and Fulton counties. Some stepped down under a cloud of suspicion. Others left amid scandal or even outright criminality.

Allegations include sexual improprieties, harassment, voter fraud, giving state computers to family members and gross intemperance on the bench.  Why is there so much disorder in the courts?

'This is the worst rash of judicial misconduct I’ve ever seen,' said former Georgia Supreme Court Chief Justice Norman Fletcher.  'There have been far too many, and it doesn’t reflect well on the judiciary. You can’t explain some of this conduct.'

Judges haven’t just started misbehaving, court watchers say. The news of one sensational case after another has created a snowball effect, prompting more complaints being filed with the Judicial Qualifications Commission [the JCQ] to quicker resolutions.

This month, Cobb County Superior Court Chief Judge Kenneth Nix abruptly announced he would leave Oct. 6 and admitted he had 'flicked' the two women’s bottoms while they sat in his lap for a photo. The women countered in a public statement that it was no playful touch, it was a 'sex crime.'

In Fulton, State Court Chief Judge A.L. Thompson, on the bench 30 years, notified the governor by letter Aug. 5 that 'it is time to move on.'  Thompson insists he was not being investigated for malfeasance. But judges have long complained about Thompson’s absences, and electronic parking garage records provided to The Atlanta Journal-Constitution showed he came to the courthouse just 56 days in a seven-month period. Last week, Thompson issued a statement saying the JQC had not 'interviewed'  him nor had the JQC disciplined him. He declined to say whether he had met with a JQC investigator before announcing he would step down on Sept. 6. The judge, in an interview, noted health issues have long bedeviled him.

Superior Court Judge Frank Mills III, chief of the Cherokee County circuit, said judges have noticed the resignations. 'I think we’re all bewildered by it; we all talk about it,' he said. 'But most of these cases are not similar, so it’s hard to say there’s any trend.'

It’s not unusual for judges to make enemies, given the gravity of their decisions, such as assigning child custody and sentencing people to prison. Because judges are so powerful, few people are willing to file complaints against them.

'Think about the inherent nature of a judge; how many people will be critical of you?' asked Habersham County District Attorney Brian Rickman, who investigated one judge in his circuit and watched as another’s career disintegrated. 'Most people, like lawyers and court employees, try to keep you happy. There’s a danger of too many people trying to kiss your butt.'

But increased efforts by the JQC seem to be getting results.

'The recent spate of resignations is a radical difference from what happened five years ago,' said John Mrosek, a Fayetteville lawyer who twice ran unsuccessfully against Judge Johnnie Caldwell. The judge resigned this year following allegations he repeatedly sexually harassed a female attorney.

'How many people witnessed Caldwell and [Chief Superior Court Judge Paschal] English doing what they did and turned a blind eye?'  Mrosek asked. 'Once there’s a psychology of not following the rules, it pervades everything.'  English resigned abruptly in April amid revelations he was having an affair with then-public defender Kim Cornwell, who had hundreds of cases before the judge.

Both Caldwell and English resigned soon after meeting with JQC investigator Richard Hyde.

A year ago, Hyde, a former Atlanta police detective, was given authority by the JQC board to confront judges with allegations and his investigative findings and negotiate a quick resignation if warranted.   That was the case in the resignations of Caldwell and English, Mrosek said. '[The JQC] came in, pointed a pistol at them and said, ‘Easy way or hard way.’

Hyde, he added, 'is traveling around the state collecting scalps.' Hyde declined comment.

Most judges choose to resign when confronted rather than go through the embarrassing process of having the commission bring formal, and public, charges against them. If they resign, the allegations often remain secret, which has brought criticism of the agency.  Some judges fight the charges and go to trial, with the Georgia Supreme Court issuing a final opinion. In the case of Twiggs County Probate Judge Kenneth Fowler, witnesses at his trial said Fowler swore at defendants, ordered parties to 'shut up,' referred to African-Americans as 'colored'  and required defendants to prove their innocence.

'His ignorance of the law is inexcusable, and his abuse of his judicial office unacceptable,' the state Supreme Court said in June, removing Fowler.  The commission has been increasingly aggressive since 2008, when South Georgia judges Brooks E. Blitch III and Berrien Sutton resigned after the JQC brought corruption charges against them.

'That has heightened the interest in the role of the JQC,' said Robert Ingram, a lawyer and one of the JQC’s seven commissioners. 'I think that leads to more cases being filed. People who may have had a complaint may have thought the JQC would [now] take it seriously.'

Some complain the JQC acts too slowly. Joe Hendricks, a district attorney in North Georgia, said that it took almost 10 months for the agency to bring formal counts of misconduct against Superior Court Judge Oliver Harris 'Harry' Doss Jr. He was accused of taking state computers for his family, insulting and threatening court staff and repeatedly failing to rule on cases, backlogging the system.

JQC probes are secret, “but a lot of people at the courthouse were aware of the investigation because several people were questioned,” Hendricks said. 'This hung over our heads for nine of 10 months. Those months were very difficult. ... There’s kids awaiting a decision on their custody, defendants waiting for a trial. There’s too many lives hanging.'

The judge resigned in December. Hendricks said that, with Doss no longer on the bench, senior judges closed 1,314 cases the first half of 2010, 302 more than the same time last year with Doss on the bench.

Ingram acknowledged the system can be slow, but noted the JQC has an annual budget of about $250,000 and a state judiciary with more than 1,800 members. 'I think Georgia’s budget is the smallest of all 50 states when compared to the number of judges,' he said.

● Clinch County Superior Court Judge Brooks Blitch, who resigned after being accused of overseeing illegal payments to employees and ordering the early release of inmates.

● Woodstock and Marietta municipal Judge Diane Busch, who resigned after being charged with furnishing alcohol to teenagers, stemming from a Christmas party at her home.

● Superior Court Judge James Cornwell Jr. of the Mountain Judicial Circuit, who resigned after allegations he went to Las Vegas with a woman whose divorce he signed; took his underage son to a strip club; and waited three hours before reporting he wrecked his SUV.

● Fayette County Chief Superior Court Judge Paschal English, who resigned amid disclosures he was having an affair with a public defender assigned to his court. A deputy found them having sex in a parked car.

● Twiggs County Probate Judge Kenneth Fowler, who was removed for requiring criminal defendants to prove their innocence and having defendants “buy out” of their community service by making deposits into a bank account he controlled.

● Cobb County Chief Superior Court Judge Kenneth Nix, who resigned after being accused by a county prosecutor and investigator of inappropriately touching their bottoms.

● Chattooga County State Court Judge Carlton Vines, who resigned after being indicted for voter fraud. He already had been suspended after a DUI arrest.

● Chief Superior Court Judge Ernest “Bucky” Woods of the Mountain Judicial Circuit, who resigned after being accused of contacting a female criminal defendant through Facebook.
_____________________________
I was born in Valdosta, Georgia.  Naturally, I've been defensive about the South throughout my education.  I strongly admired Judge Griffin Bell who served as attorney general under President Carter.  Recently I had the pleasure of cycling with a diabetes researcher from Savannah and we talked about beautiful Georgia. My travels throughout the South in my lifetime are some of my most cherished memories.  But there is also this ridiculous aspect to the South and its jurisprudence like the flamboyant Dickie Scruggs corruption scandal in Mississippi; the law makers in Tennessee who aren't going to be happy until every yahoo in a bar is armed, and of course the Georgia judges.

In reality, none of this has anything to do with the South as such, the problem of bad judges is something you read about on Bad Lawyer week in and week out.  Being a good judge is a magnificent thing--there is no doubt that throughout Judeo-Christian history the story of Judges, good and bad, supply content for the Torah, Talmud, New Testament, all  of western literature including great Operas and film.  A judge has tremendous power and commands great respect, consequently, there is a zone of artificiality around a man or woman occupying the position as even people who know better act in ways that are ingratiating.  A humble person in the position of Judge is able to transcend this bubble in their normal affairs and put persons at ease.

The larger problem is the one that can simply be traced back to ego run wild.  A person referred to as "your honor," both expressly and in myriad subtle ways can unconsciously fall victim to the illusion that this status lifts them apart from humanity.  There was a former OurCounty Judge, Judge Full O Self, with an office in the suite of offices that I shared in my first couple of years in private practice.  This "Judge" never abandoned the title of "Judge" going so far as to advertise in giant font in the Yellow Pages as:  Judge Full O Self.  In the decades before the cell phone,by prearrangement with his secretary, Judge Full O Self would have himself paged at casinos in Vegas and Atlantic City during various Bar Association junkets.  According to friends who were there, he thrilled to hear, "paging Judge Self" over the casino public address system.

None of this matters, in reality if the person with the power and glory of Judge is a a wise and merciful jurist.  Where this breaks down is when as we see in Georgia, petty tyrants have the power to take and grant liberty, property, and dignity from others.  That , of course, is when the rubber meets the road.  God bless, the judge with ego in check and the capacity for genuine wisdom--it matters not one whit to me whether that judge arrived at the exalted place by election or merit selection, by accident or destiny.
Posted by Anonymous at 5:21 AM