Constable, You Ain't No Stinkin' Cop

Matthew Kemeny at the Patriot-News (Pa.) reports on the "fake cop" who appears to have used his constable's badge to hit on some local women:

"It will be up to a jury to decide if a South Hanover Township state constable broke the law when he questioned three women in two separate incidents in May in Lower Paxton Township, a Dauphin County District Judge ruled today. 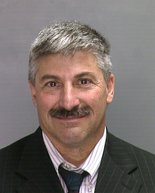 Jack Garner, 54, (pic) is accused of impersonating a police officer and official oppression when he followed female drivers to their destinations, flashed his badge to them and asked for their license, registration and personal information. He also asked a passenger in one of the vehicles for her information, police said.

Share Charges of false imprisonment were dismissed by Judge Joseph Lindsey, but he bound over the other charges to county court.   Two women testified at this afternoon's preliminary hearing that they were scared when confronted by Garner.

Andrea Sherman, 18, said Garner followed her to her parents' home off Union Deposit Road and told her he saw her cut off another driver. She said he pulled up behind her in her driveway before approaching her, showing his badge and asking for her information.   Another woman, Lauren Christen, 22, said Garner pulled his gold Ford Taurus behind her car as she and three other women were returning to Empire Beauty School from lunch. Garner accused Christen and Jessica Bender, of littering -- flicking their cigarettes out the window -- as they were driving back from Applebee's, she testified.

Garner asked for Christen and Bender's addresses and phone numbers and said he couldn't issue a warning because he wasn't in uniform, she testified.   Garner's attorney, Bryan Walk, said he doesn't believe what his client did rises to the level of a criminal act. He also argued his client never intimidated, threatened or flirted with the women.

As a condition of bail, Garner cannot serve as a constable until the case is resolved, the judge ruled."
__________________
There was an up and coming part-time, Municipal Court judge in a 'burb of OurTown who practiced domestic relations/family law for his day job.  This guy had it going on, he was handsome, well-dressed and he was a rising star. But "the Judge" could not resist trolling the hallways of the old court house where the domestic relations courts are located, looking for women waiting to have their divorce cases to be called for hearing.  This clown would use his insider status to obtain the names and phone numbers of soon-to-be single women.  Bearing in mind that these are some of the most vulnerable people, this "Judge" exploited them.

The lawsuit my client brought against him helped end his judicial career.
Posted by Anonymous at 6:58 AM