Sweetheart Breaks on Your Dime 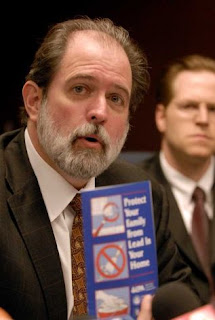 The ABAJournal.com tips to the Albany Times-Union report involving the sweetheart deal given Albany prosecutor Michael McDermott (pic, left) on his student loan payback by the contract agency in charge of protecting the public dime.

This is reporter Brendan Lyon's story in excerpt:

An investigation by the state Inspector General's office has found that employees of a state agency that oversees student loan collections gave preferential treatment to an employee and to a well-known Albany attorney, [and former prosecutor] Michael P. McDermott.

The report, released Thursday morning, also accuses officials with the Higher Education Services Corp. (HESC) of making false entries in a computer system to prevent outside collection vendors from receiving the information. The inspector general said the false entries were intended to prevent the loss of state worker jobs by thwarting the transfer of $1.25 million in HESC collection accounts to private companies. 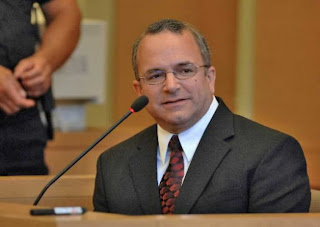 The report, which was forwarded to the state Attorney General's office for possible criminal prosecution, contends the actions of the state workers were 'unlawful.' Among the people targeted in the report are Joseph Catalano (pic, right), assistant vice president of collection and default management at HESC.

Catalano 'prompted his subordinates to unlawfully arrange special treatment for former Albany County prosecutor Michael P. McDermott by reducing his student loan payments 60 percent, purging his collection debts and blocking the garnishment of his wages, at a cost of more than $24,670 to state and federal taxpayers,' the report states.

Catalano, 54, of Delmar, told investigators that he met McDermott after being called as a witness in the 2006 high-profile murder trial of Christopher Porco, who was convicted of murdering his father and attempting to murder his mother in their Delmar home. Catalano, Christopher Porco's former youth minister, testified that he went to the hospital the week of the 2004 attack and spoke to Porco for about three hours.

On the witness stand, Catalano testified about Porco's state of mind at the hospital, where his mother was undergoing multiple surgeries, and about conversations they had regarding the couple's home-alarm system and Porco's treatment by Bethlehem police.

The inspector general's report prominently recounts McDermott's role as a prosecutor in the murder case, which drew national attention.

McDermott, now in private practice with the law firm O'Connell & Aronowitz, issued a statement Thursday saying he cooperated with state investigators and that his student loan debts were not reduced by any of the actions taken by HESC on his behalf.

'I never requested preferential treatment and did not believe that my account was being handled differently from those of others similarly situated," McDermott said. "Indeed, I was told that any action taken on my account was in compliance with HESC policies and regulations. At the end of the day, my monthly loan payment remained the same after I contacted Mr. Catalano as it had been before I contacted him.'

McDermott said he contacted Catalano because he knew he worked for HESC and he wanted to speak to someone after his account manager there had died.
_________________________
This may seem like an arcane story, but it is in fact one of those situations where you as a taxpayer should be pissed,  It is one of those situations where two grown men fall in love with their egos in the form of how much "juice" they have to help one another out, even if it sort of screws the taxpayers.  The former prosecutor should have known better and he used his office and profile to get a break he didn't deserve.  Wanna bet that this happens all the time?

The thing is, this is a n-o-t-h-i-n-g but what it leads to, let's say: duck hunting with the Vice President of the United States then being blind to the appearance of impropriety when a case comes along that you shouldn't sit on.   Not that that sort of thing ever happens.

Here in OurCounty, local government is going through major gyrations including a wholesale electoral uprising dumping the former form of County government because well everyone was corrupt. Many, many public officeholders and employees in OurCounty were doing favors for one, another--they loved their prerogatives.  Our crooks fell in love with "their juice," their perception that the property tax revenue stream was theirs to dole out to friends and family.  That's what the Blagojevich trial was about, this story from Albany, NY tells you, at a seed level, how such things begin.
Posted by Anonymous at 3:43 PM