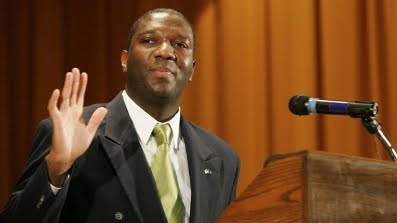 "A Richland County grand jury indicted Greene, 32, for disseminating, procuring or promoting obscenity - a felony - as well as a misdemeanor charge of communicating obscene materials to a person without consent. If convicted, Greene could face up to three years for the misdemeanor or up to five years for the felony. Greene declined comment at his home in Manning. He has also refused to talk about the charge in interviews, and his attorney did not immediately return messages seeking comment.

Greene had visited the computer lab at the Bates House dorm in Columbia several times before his arrest, using an old student ID card to gain admission, according to campus police records. Dorm staffers told police they had asked security staff not to let him in, but reports did not give any more details.

Greene graduated from South Carolina in 2000 with a political science degree.  Greene, an unemployed military veteran, handily defeated Vic Rawl, a former lawmaker and judge who had been considered an easy win by Democrats.

Up to that point, Greene had done no visible campaigning and had no website, fundraising or staff. After AP reported Greene's arrest, South Carolina Democratic Party leaders called on him to withdraw his candidacy. South Carolina law prohibits convicted felons from serving in state office, but there is no such rule for the U.S. House or Senate."
___________________________________
Anyone else think this guy had a big bullseye on his back?
Posted by Anonymous at 3:47 PM