The Fen-phen scandal is claiming the law license of the Judge who approved the settlements and purportedly supervised the settlements if a report at the Lousiville Courier-Journal is accurate.  Turns out investigators determined that Judge Joseph "Jay" Bamberger was in on the shenanigans that ended up costing the plaintiffs millions to corrupt Kentucky plaintiffs lawyers who stole millions.  This is Reporter Andrew Wolfson's account from this morning's story:

"The judge who presided in Kentucky's scandalous fen-phen case should be permanently disbarred for signing orders 'authorizing and sanctioning the largest scale fraud in the history of the Commonwealth of Kentucky,' a trial commissioner has said.  Finding that Judge Joseph 'Jay' Bamberger engaged in conduct involving  'dishonesty, fraud, deceit or misrepresentation,' Susan Phillips, a Louisville lawyer, recommended that the Kentucky Bar Association and state Supreme Court never let him practice law again. 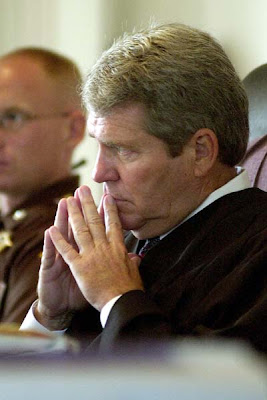 In a 27-page report filed Monday, Phillips said it is 'inconceivable' that Bamberger — who once was named Kentucky's co-judge of the year — did not know what he was doing in allowing and covering up the scandal, particularly given that he benefited personally from the fraud.  Bamberger, 68, resigned from the bench in 2006 rather than be removed when the state Judicial Conduct Commission publicly reprimanded him for misconduct that  'shocks the conscience.'
Neither he nor his lawyers returned calls Monday for comment on the proposed sanction, which could be reduced by the bar association or high court.

Lexington attorney Angela Ford, who now represents the 440 clients who were defrauded in the case, said Phillips 'came to the inescapable conclusion that Bamberger did what the lawyers asked of him without any concern for the truth or the claimants.'

The clients sued the drug's maker, American Home Products, after it was linked to fatal heart valve damage.

Connie Centers, of Lawrenceburg, who suffered severe heart valve damage from the diet drug and would have gotten only $1million of the $2.6million she should have collected as the settlement was first approved by Bamberger, said Monday that the former judge deserves to lose his license.

[Attorney Susan] Phillips found that Bamberger approved fees of $98million for attorneys William Gallion, Shirley Cunningham Jr. and Melbourne Mills Jr. from the $200million settlement of the case without reviewing or requesting 'any documentation whatsoever.'  He also signed an order saying that payments to the 440 clients and their lawyers were fair and reasonable even though he had never asked for, nor been told, any of the settlement's details, Phillips said.

{Ms. Phillips] said [Judge Bamberger] helped cover up the scandal by signing an order sealing the file and requiring that future documents in the case be distributed only to the plaintiffs' lawyers.

And she said he personally benefited by accepting an appointment as a paid director of the nonprofit foundation into which the lawyers poured $20million in money left over from the settlement after telling clients the amount was 'minuscule.' Bamberger returned the money he was paid, about $48,000, only after the Judicial Conduct Commission began investigating him.

Cunningham and Gallion were convicted of fraud and sent to prison last year.

Under their contingency-fee contracts, they and Mills should have been paid about $60million of the $200million settlement. Instead, they took $94.6million for themselves and others, including consultants, administrators and lawyers, and put $20million more into the foundation.

The former clients later won a $42million judgment against them, and all three have been disbarred.

[Another report] disclosed that the bar association is pursuing a disciplinary charge against Stan Chesley, a renowned Cincinnati class-action lawyer who helped negotiate the settlement.

In his defense, Bamberger said in the report that he relied on the lawyers appearing before him, including Chesley, being truthful and honest.

But Phillips noted that Bamberger admitted he signed orders he knew were 'blatantly false' and did not review 'a single document to satisfy himself that a fraud was not being committed' despite numerous 'red flags.' She said Bamberger knew his close friend, trial consultant Mark Modlin, stood to gain a $2million fee from the deal, and that the judge signed some of the orders in 'highly suspect, after-hours, off-the-record sessions.'  Bamberger also 'berated' the one client who objected to the settlement when she came before him in court, according to the report.

Bamberger was in private practice from 1970 to 1982 and later was a public defender and prosecutor before he was elected as a district, then circuit judge for Boone and Gallatin counties."
___________________________
The Louisville Courier-Journal is doing a superb job of yielding up details establishing the exact nature of the wrongs done by these lawyers and others who set up a gaming table out of a mass tort action.  This is how it's done, first you get the "juiced" lawyers, then you get a top judge; you hire the people close to the judge who can work the inside straight;  and, when it's all over you cover up and seal the record.

Unfortunately, after stealing millions, millions were not enough.  They had to steal more.

I was looking for a picture of Judge Bamberger, and I came across a number of articles talking about the brilliance of this son of a tradesman.  Bamberger was compared favorably with federal judges in terms of his capacity to sort through financial issues in complex litigation.  Judge Bamberger was assigned by his peers to handle banking cases in the early years of this last decade.

All of these lawyers represent the best talents and brightest minds now lost in the black hole of ego and greed.
Posted by Anonymous at 7:16 AM