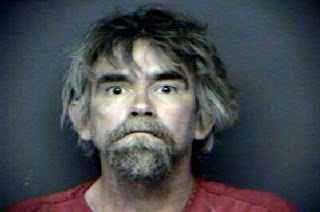 Oliver Springs, Tennessee has a determined drunk, Lonnie Michael Haney taken into custody for his fifth DUI this time astride the John Deere lawnmower.  This is from the Knoxville News Sentinel:
A Clinton man was arrested for his fifth drunken-driving offense Sunday afternoon. His lawnmower was taken to the impound lot.The arresting deputy knew that Lonnie Michael Haney, 46, had had his driver's license revoked when he recognized the serial offender driving a John Deere riding mower southbound along the shoulder of the northbound lane on Tri-County Boulevard, according to the Anderson County Sheriff's Office incident report.

Haney allegedly had a strong odor of alcohol on his breath, red glossy eyes, slurred speech and appeared unsteady on his feet, the report states. He failed a subsequent sobriety test.  Once arrested and seat-belted into the back seat of the deputy's cruiser, Haney also was outfitted with a helmet, the report notes, after he began banging his head against the inside of the vehicle.
He now is charged with felony DUI, driving on a revoked license and violation of the implied consent law, ACSO Chief Deputy Mark Lucas said.
________________________________
I'm chairing the 5:30 Monday evening AA meeting which means that for this month I choose the topic which we "discuss."  Since there is nearly a hundred people at this Monday session, really the discussion is more a series of brief comments for nearly everyone to have an opportunity to make comment.

Tonight I chose the 1st Step because immediately prior to the meeting I spoke to a "new guy" who had never been to an AA meeting before, and besides there were lots of new faces.

The first step is: "We admitted that we were powerless over alcohol and that our lives had become unmanageable."  Notice, there are two parts to this step.  "powerless[ness] over alcohol," and "unmanageable" lives.  Also notice that it doesn't say "I admitted..." it says "we admitted."  You don't have to be a Lonnie Michael Haney to admit powerlessness over alcohol or unmanageabilty--in fact, the message of powerlessness and unmanageability was there for Mr. Haney long before he fired up the John Deere, of course "nothing runs like a Deere."

In all seriousness, my drinking was out of control with the first drink I took after I crossed over into alcoholism.  I proved "powerlessness" every time I drank because after the first drink there was no telling how much I'd drink subject to having ample supply available to me.  But the part that got me was the "mental obsession over drinking which entailed expending way too much conscious deliberation over when I could drink the way I wanted to drink unencumbered by the world.  You see, your life becomes unmanageable when you sacrifice your mental health to untreated alcoholism.  Mr. Haney is a vivid reminder that you can reach your "bottom" and just keep digging.  Not all hopeless and helpless drunks look like or act like Haney(although, I suspect we feel on the inside like Haney looks on the outside)--on Bad Lawyer over the last year we've seen Judges, lawyers, doctors, Moms, teens, and Grandmothers, just keep digging.   Alcohol is cunning, baffling and powerful, but there is a solution and it begins with the "admission" we make with the very "first step."

I'm thrilled to report that on the one year anniversary of this Blawg, August 17th--one day at a time--I will celebrate a year of sobriety.
Posted by Anonymous at 5:33 AM