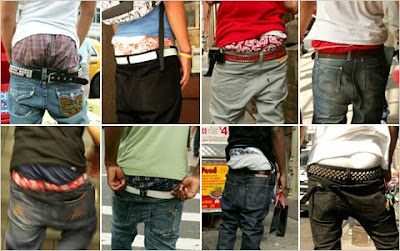 The most controversial posts on Bad Lawyer last year related to my defense of Judge who imposed rules relating to court room attire.  Here we have a case of a New Orleans area woman who got herserlf jailed for showing her ass in a courtroom to a judge. She had a prior history of criminal history in the same courtroom. Good move on the ass-bearing.  This is from NOLA.com:

A state judge in Jefferson Parish sentenced a Kenner woman to 10 days in jail Thursday because she was in court with low-riding pants that revealed her underwear and, according to one witness, a bit more.  Kimberly Senette, 23, remained in the Jefferson Parish Correctional Center Friday afternoon, after Judge Steve Windhorst of the 24th Judicial District held her in direct contempt of court Thursday morning for the apparent inappropriate appearance he said showed disrespect for the court. Senette could not be reached for comment, and her family declined to speak with a reporter Thursday and Friday.

Senette went to court Thursday to urge her brother, Lawrence Senette, 18, of Westwego, to accept a plea deal in connection with charges of armed robbery and battery on a correctional officer. She was dressed in a dark T-shirt adorned with a printed design, black Nike tennis shoes and knee-length plaid shorts. While waiting for her brother's case to be called, Senette briefly left the courtroom, according to a witness who asked to not be identified. Her panties and the top of her buttocks were showing above her shorts, the witness said.

When she returned to court, Windhorst questioned her low-riding pants, witnesses said. She said she had to remove her belt when going through the security checkpoint at the parish government complex entrance.

She ended up being handcuffed and seated in the jury box a row behind her brother, crying with her family members after he eventually accepted a 12-year prison sentence in exchange for his pleading guilty to carjacking and simple battery charges.

By the time she was escorted out of court by a deputy, her shorts hung normally from her hips with a fuchsia belt affixed to the earthy colored pants. Her family members left the courtroom furious. Some family returned to the courthouse Friday morning in hopes of gaining her release.

State lawmakers have attempted to criminalize low-riding pants, most recently in this year's regular session when state Rep. Rickey Hardy, D-Lafayette, filed an ill-fated bill that would have outlawed clothing 'which intentionally exposes undergarments or the cleft of the buttocks.'

While the fashion style remains legal, judges and bailiffs routinely remind people of appropriate dress for court. The state's code of criminal procedure gives judges authority to hold people in direct contempt when they show 'disorderly behavior' toward judicial officials 'tending to interrupt or interfere with the business of the court or to impair its dignity or respect for its authority.'
'It certainly is not unheard of for a judge to hold a person in contempt for disruptive or disorderly dress in court,' said Dane Ciolino, a Loyola University law professor. It wasn't Senette's first time before Windhorst. She pleaded guilty in his court four years ago to a theft charge and received two years of probation, records show.
________________________________
Really, I don't get this!  You are in court.  This is one of the sacred places in our civilization, conduct yourself with some sense of the seriousness and dignity o fthe institution.  That the lawyers and judges do not always live up to this ideal, well that's a problem.  But you are in charge of you, dress appropriately.
Posted by Anonymous at 9:01 AM